Security rock stars make up for the absence of booth babes 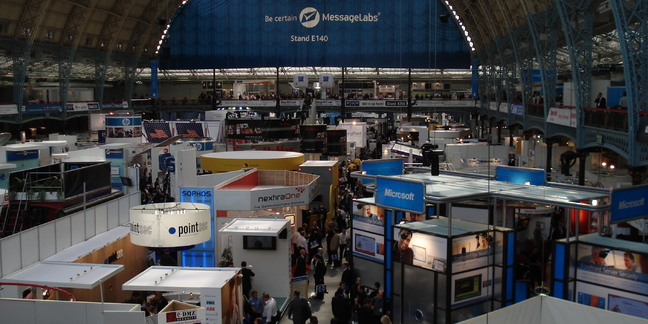 Infosec 2015 Infosec, the annual IT security trade show, wheeled out the rock stars of the Infosec world for its 20th anniversary this week.

Bruce Schneier and John McAfee – the Paul McCartney and Keith Moon of the cybersecurity world – both keynoted as the show return to its original home in Olympia, London following an extended sojourn at nearby Earls Court between 2009 and 2014.

Thousands of delegates were given the opportunity to attend around 350 stands, as well as attending keynotes and other presentations. Absent this year were the booth babes who had been a feature of the show in its previous residency in Olympia.

Info security has always been a place to do deals rather than to unveil new research or make significant product announcements, and that remained the case this year. Delegates told us they went to the show to easily visit representatives of all the vendors in a particular market sub-segment, to catch up on the latest in new technology or just to network. Simply attending the show earned delegates Continued Professional Education (CPE) to keep their CISSP (Certified Information Systems Security Professional) certification up to date.

Shorn of dolly birds, the best most of the stands could offer were the usual giveaways (pens, T-shirts), free beers in the late afternoon and the occasional golfing game. The stands themselves were unimaginatively furnished with monitors or the occasional security appliance. Take away the signage and it would be difficult to work out who was who. The show floor was quite crowded, so several vendors (eg. NCC, IOActive) took the sensible alternative of hiring space in a local pub instead.

Key themes of Infosec – in so far as it had any – included Internet of Things insecurity and security intelligence.

Infosec bills itself as "Europe’s number one information security event", but it had plenty of competition this week with the now well-established BSides conference and RSAC Unplugged, a one-track mini conference pitched at chief execs and CISOs and covering more general information security related business issues. While Infosec is all about marketing, BSides – now in its fifth year – is the polar opposite, offering a platform for hackers and techies to present the latest in security research or more left-field insights into topics of interest. BSides is actually about much more than that with lightning talks and a rookie track also in the mix.

BSides offers a genuine sense of community and upbeat, unfussy vibe that offers a contrast to Infosec. The two shows have different purposes and audiences. RSAC Unplugged, a cut-down version of the (temporarily?) discontinued RSAC Europe, is still finding its feet, but had at least found the best possible digs, at the Kensington Roof Gardens. ®