Review Despite some lovely work, LG has been a perennial bridesmaid at the smartphone wedding. LG’s rival giant Samsung has walked off with the only profits being made in the Android business. But this year LG senses a chance to be the bride.

For 2015, Samsung has made its best phone in years – but it isn’t a Galaxy S as the world knows a Galaxy S. In a break with tradition, the Galaxy S6 has a sealed battery and no expandable storage. And it’s the first Galaxy to be priced higher than the iPhone.

Yes, the Galaxy S6 is a jewel of a design, and it ticks many of "best in class” boxes – such as best camera, and sharpest display, for example. But for that familiar Galaxy proposition of practicality – particularly a long battery life – look elsewhere.

Sensing the opportunity, LG has made its own flagship for 2015 much more "Galaxy-like". It retains the removable battery of last year’s G3 and is priced keenly off-contract. You can stuff in a Micro SD card up to 2TB. (No, 2TB-sized MicroSDs don’t exist yet). So: come hither, ye disappointed Galaxy owners, we’ll look after you now.

But does LG live up to the billing? For the most part, yes. LG has done a great job, incrementally building on its strengths. The LG G4 has an excellent camera and gives you a quite startling display in a comfortable sized package. There’s a few reasons for this. The main one is because LG makes the somewhat eccentric choice of placing all the three main buttons on the rear of the device, rather than around the sides. This makes the sides very slim, and more comfortable to hold.

For additional comfort, the edges are tapered in slightly, rather then being exactly perpendicular to the display. This is a tiny design detail that added enormously to usability. There’s also a subtle “banana” curve from top to bottom, but you sort of have to know it's there to notice. The overall effect – after seeing so many rectangular slabs – is like an optical illusion. In a good way, that is; it’s the most comfortable phone with a 5.5 inch panel I’ve used.

However the LG button placement is something of an acquired taste. With the G3 I found I needed to stick something on the Power button to help me navigate "blind”. If your finger misses the Up volume key you leave a paw print on the camera lens. 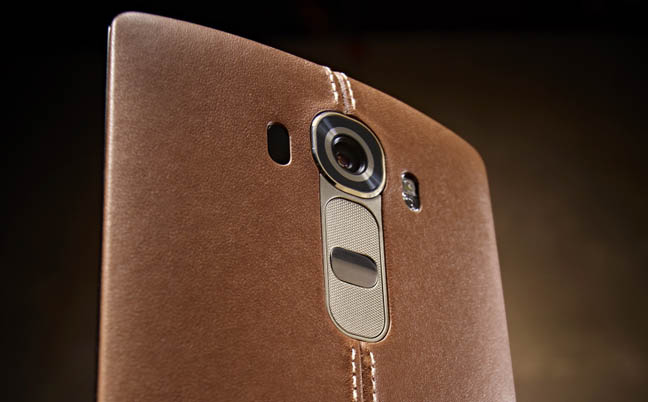 The most eye-catching feature is the ability to order a G4 in a stitched leather back cover, for not much more than the plastic model. According to the reviewer's blurb this is "to add analogue sensibilities to the digital device". It's actually a manufacturing miracle to rival anything Apple has pulled off: it's real cow hide that doesn't add to the bulk of the device. I think it looks fantastic, and makes the G4 much more grippable than the regular diamond-patterned plastic shell.

LG isn’t the first to offer leather – you can choose a leathered Motorola Moto X to order – but this is so much thinner, and the zip-like design (using proper Güterman Mara thread) is really quite distinctive. Only time will tell if it stands up to everyday wear and tear – but it feels like it’s been on the market all along.