Your servers are underwater? Chill OUT, baby – liquid's cool

Submerge the servers in OIL? Are you COMPLETELY out of your mind?

Although liquid cooling is now commonplace in HPC applications, part of the reason for its slow adoption in enterprises and mainstream data centres is often put down to hydrophobia among IT managers.

It’s completely understandable; after all we have all been brought up to believe that mixing most liquids with electrical equipment is a dangerous no-no, particularly when dabbling with extremely expensive kit.

Also, there’s the effort and cost of re-fitting your existing data centre and replacing the kit to handle liquids.

However, many people in IT are now more familiar with engineered liquids – such as Novec – being introduced into server rooms in sprinkler systems specifically developed to dowse equipment safely, if necessary.

Something that will certainly test the faith of even the most daring of most IT managers, however, is liquid immersion. Generally only found in supercomputer facilities and very-high-density greenfield sites, this approach sees containerised data centres featuring large ‘baths’ filled with a dielectric liquid into which racks of equipment are submerged.

Mineral oil has been used in immersion cooling before – for example when another 3M dielectric coolant – Fluorinert – was used to chill supercomputers like the Cray 2.

And yet it still looks counter-intuitive, more than a bit scary and will provoke some strange reactions if you show your colleagues videos of the baths in action, but it is nevertheless in use at a number of large data centres around the world.

Perhaps the best known proponent of liquid immersion cooling is Green Revolution Cooling. Its CarnotJet system allows rack-mounted servers from any OEM to be dunked in special racked baths filled with a dielectric mineral oil blend called ElectroSafe, an electrical insulator it claims to have 1,200 times more heat capacity by volume than air. 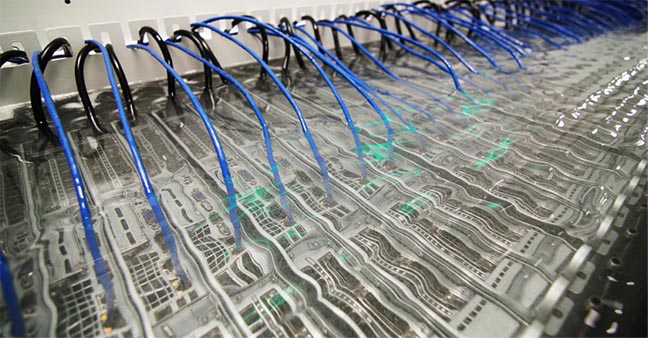 Apart from the tank arrays, the CarnotJet system also uses pump modules for heat exchange, cooling towers to extract heat from the system, and an infrastructure management system.

The liquid captures the heat from the equipment and is then pumped to the heat exchanger. This then expels the heat via a warm-water loop and cooling tower to another location – perhaps heating radiators or even greenhouses.

Green Revolution Cooling claims cooling energy reductions of up to 95 per cent, server power savings of 10-25 per cent, data centre build-out cost reductions of up to 60 per cent through simplified architecture and improved server performance and reliability as a result of less exposure to dust (and moisture).

Telecoms operator Orange – which deployed a Green Revolution Cooling at a data centre in France last year for an undisclosed server footprint – called it the most efficient cooling technology it had tested.

The telco claimed to have saved about 20 per cent in energy “versus our existing free cooling system and can now add capacity in some previously unusable space. Operating in oil is easy".

Next page: A cooler future
Page: