Rackspace sees future in cloud mgmt services – even on others' setups

CTO: We might have run your AWS or Azure setup

Rackspace Solve London Speaking at the Rackspace Solve event in London, the company's CTO John Engates said an increased focus on cloud management services rather than just infrastructure might extend to running applications on third-party clouds.

Rackspace is already rolling out what it calls Cloud Office: Microsoft Office 365, or Google Apps for Work, purchased through and supported by Rackspace.

“What about Rackspace services on top of other public clouds?” said Engates. “That’s something that we’re looking at. We’re talking to customers about what they would like us to do in that regard. There is no customer that is pure any more; every customer we talk to has a little bit of infrastructure on their own data centre floor, they have some in Rackspace cloud, they have some software as a service providers and they have some maybe at Amazon or Microsoft Azure.” 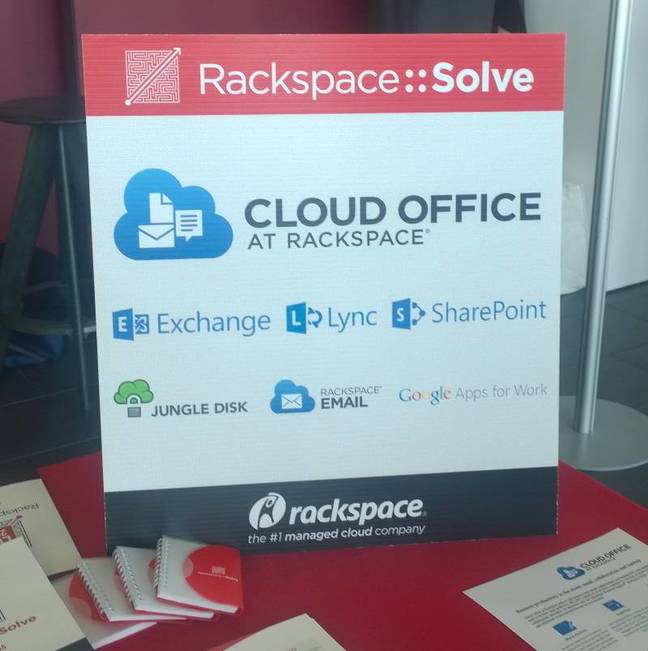 Rackspace will manage Microsoft or Google cloud applications for you

Rackspace also has agreements with some customers where it manages private cloud setups for them in on-premises data centres.

Rackspace is not retreating from hosting cloud services directly – the company is opening a new state-of-the-art data centre in Crawley, near London, for example – but the change in emphasis does reflect the difficulty of competing with the scale of the largest cloud providers as well as what Rackspace sees as an opportunity in management services.

Companies such as Amazon, Google and Microsoft have more resources to invest in cloud infrastructure.

“There are certainly advantages that they have,” said Engates. “There are scale advantages; we don’t own undersea fibre, we are never going to buy an undersea cable.”

He adds that “most applications don’t require that kind of infrastructure. The vast majority of applications will never be at that scale.”

Engates says that Rackspace’s management services more than compensate for any infrastructure failings.

“When you start to blend Rackspace’s services and support into the mix, and those things become a bigger and bigger proportion of the cheque that our customers write us every month, the penny or two of infrastructure difference fades into the background.”

The move towards services is a logical progression for a company that started with a pure hosting offering.

“In the early days – I joined in 2000 – the business was created as a dedicated server business. We put a server on a rack, put Windows or Linux on it, and handed over the administrative rights to the customer. But we found many customers needed help with those servers. We went from dedicated server hosting to managed hosting,” said Engates.

According to Engates, the same thing is happening with cloud computing.

“The early adopters were the do it yourself crowd. The next wave of adoption are the people who need help. They don’t have the resources or the expertise. We’ve rebranded the company as the managed cloud company,” he said.

“This is something Amazon is almost denying. Who is going to sit between you and the cloud and figure out what the right approach is?”

The IT expertise within enterprises, says Engates, is often focused on core functions, and when it comes to something like a born-in-the-cloud application for a marketing campaign, businesses or their agencies look for help with how to host and scale it appropriately. ®