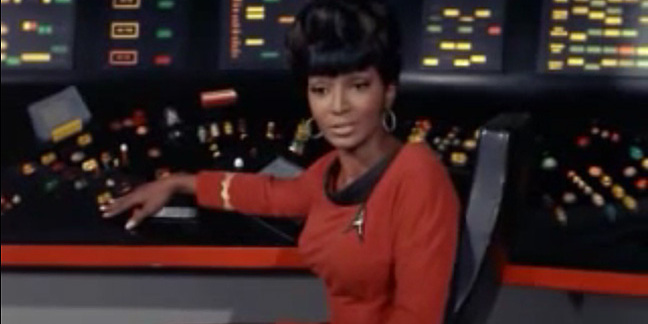 Nichols – best known for playing Lt Nyota Uhura on TV and in the Star Trek film franchise – suffered a mild stroke while at her home in Los Angeles on Wednesday evening.

Her agent Zach McGinnis informed Nichols’ followers on her Facebook page of the stroke. In an update, he said Nichols had undergone a CAT scan and MRI, and was awake and eating as of Thursday evening.

Nichols has shown minor signs of loss of mobility but otherwise no signs of paralysis.

Nichelle shot to fame as Lt Uhura, the red-mini-dressed, black-beehived comms officer, with one finger pressed to her ear and others massaging the flashing lights of the USS Enterprise’s comms desk in the 1960s TV series Star Trek.

She’d been picked to play Uhura in 1966 by Star Trek creator Gene Roddenberry, who’d seen her in an appearance on TV programme The Lieutenant in 1963.

The Enterprise was home to a multi-ethnic and multi-racial cast, but Nichols’ role was a major statement by Roddenberry given that most African-American actors and actresses on TV at the time were confined to playing minor and supporting characters.

Further, it was an era when activists in the US were on the march, trying to break colour barriers on ordinary things in life, such as simply riding on a bus or sitting in a cafe and ordering a cup of coffee. In a November 1968 episode, "Plato's Children", TV was rocked when Nichols locked lips with William Shatner’s swashbuckling Captain Kirk.

It was US TV’s first interracial kiss and it had worried broadcaster NBC after southern US affiliates had originally refused to air the episode. NBC had tried to have Spock kiss Uhura, but Shatner is reputed to have demanded it be only right and fitting she plant one on the ship's captain.

The get-out, eventually, was that the pair didn't kiss voluntarily but that aliens controlling their bodies had forced them into it.

Nichols has since acted and directed, and was asked by NASA to help in an astronaut recruitment programme. Her efforts are reputed to have hired three recruits who were, unfortunately, aboard the lost Challenger mission in 1986. ®

Sorry if this sounds a little… Xenu-phobic