Page File El Reg bookworm Mark Diston looks at literature's latest as Michael Bloch lifts the shirt on the private passions of the political elite. Both Steve Toltz and Joshua Cohen are on their second novels. Toltz crafts a distinctive voice while Cohen goes for an experimental approach for the tech savvy.

Michael Bloch is a biographer who has spent a good deal of his career writing about Edward VIII. Apparently the idea for this book came to him while writing the life story of Jeremy Thorpe, the Liberal politician accused of involvement in a plot to murder his former lover, Norman Scott.

Closet Queens is the story of gay English politicians in the last 120 years, more or less since the Oscar Wilde trial. From the Earl of Rothberry and the Earl of Beauchamp at the end of the 19th Century to Peter Mandelson and others who preferred to keep things quiet. This is the history of gay men in Parliament.

The book features micro biographies of numerous individuals and the narrative does have a rather gossipy feel to it. And of course, the public schools feature heavily. According to Bloch all of his subjects are narcissists who loved their mums.

Some, like the Earl of Balfour, were screaming blatant in their behaviour: “At Cambridge ... he wore velvet and collected blue china” while others led lives more suited to this volume’s title. 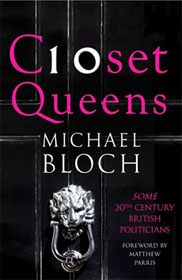 There are some brilliant one-liners, none better than Churchill’s riposte upon being informed of a minister caught in flagrante delicto with a guardsman: “And on the coldest night of the year, makes you proud to be British!”

And a few classic anecdotes, my favourite being that of the chairman of the Chelmsford Conservative selection committee: “They sent us three people to choose from, a woman, a drunk and a queer. Of course we had to take the queer!”

However, this is the problem with this book, there are a handful of brilliant stories, but as a whole it doesn’t really work other than as an encyclopedia of English eccentrics, though I loved the procession of mothers wearing monocles.

There are a few little-known nuggets of information hidden within, such as Enoch Powell’s expressed preference for Australian males between 17 and 23. Methinks the “rivers of blood” could have been streaming from his nostrils unless he exercised this preference discreetly.

Bob Boothby’s description of Lady Dorothy McMillan is worth repeating also: “A masculine woman, she reminded him of a caddie he had seduced on the golf links at St. Andrew’s”

And there are a few pieces of political repartee that you don’t get on telly, newspapers and radio, such as Harold Wilson on Edward Heath: “I’m a shit and he’s a cunt”. Also, George Brown’s hilarious critique of the 1967 decriminalisation bill: “This is how Rome fell” all help to illustrate the attitudes of the time quite well.

But what is it John Cooper Clarke had to say about nipples ...? “Where William Hickey meets Michael Caine again and again and again” applies to all these type of books, they stink of tabloid journalism, and reading a century’s worth of indiscretions, gossip and hearsay, though occasionally hilarious, is a mostly a unrewarding experience.

The biographies are too brief to engage their subjects in any meaningful way and the subject’s political careers are too repetitive to make Closet Queens anything other than an insubstantial and somewhat unsatisfying reference, and when you begin to think you might have given away all the good bits in a short review, it doesn’t bode too well for the longer outing...