Steve Toltz is an Australian novelist and the author of the acclaimed A Fraction of the Whole. Quicksand is his second novel. It is the story of two friends; Liam, a writer who becomes a cop and Aldo an idiot savant criminal entrepreneur.

The first thing that becomes apparent in this book is that Toltz is a writer of uncanny ability with a style all his own. It is a story of stories within stories and books within books. The novel takes place in Sydney and flashes backwards and forwards throughout the lives of the main characters.

Liam and Aldo’s art teacher Morell has written a manifesto called: Artist Inside, Artist Outside which is the platform for much mockery, Toltz lampoons artists and the art scene mercilessly, whilst simultaneously creating work of the highest standard: “We make art because being alive is a hostage situation, in which our abductors are silent...”

Despite his radical manifesto, Morrell has been in the same job 40 years until events force his hand. Liam decides to write the biography of Aldo, whose life then gets totally ridiculous. Steve Toltz’s text is bursting with compelling images: “Contemplative men walked minuscule dogs”. 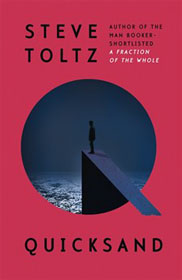 “I want to be a writer so prolific, I’ll wind up dedicating my books to women I see on the street the morning of printing. What about you?”

“To travel back in time and sterilise my grandfather.”

Aldo’s story flits between narrators as he negotiates love, prison, hospital and trying to reconnect with ex-love Stella, who: “Was a tumult of familiar odours – jasmine and freshly spilled vanilla milk shake and wax bendy straws”.

There are entertaining quotations from the likes of Flaubert and Milosz: “When a writer is born into a family. That family is doomed”.

Quicksand is a fairly typical story, most untypically told. Toltz seems to have succeeded in writing the kind of book Joshua Cohen has attempted in Book of Numbers and you can see how well he fared in a moment. Quicksand is lyrical and epic, some sections of Toltz’s prose is as elevated and poetic as any of the beats, but the characters are few and the plot not over-complex, so he gets away with more licence than most.

Even an extended fade out ending can’t disguise the fact that Quicksand is a very impressive novel indeed. Some have compared Toltz to John Kennedy Toole, and I’d tend to agree, as there are sections which remind me of The Wasp Factory as well as other similarly structured works such as Leonard Cohen’s The Favourite Game.