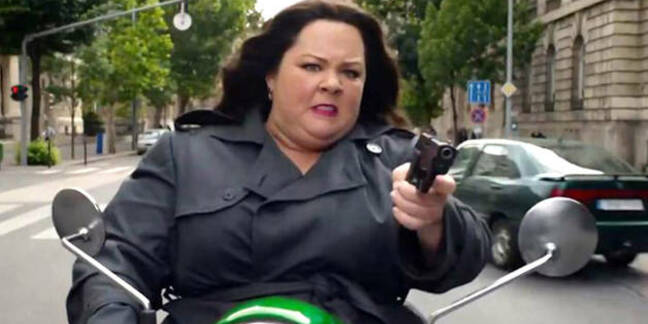 Film Review Plenty has already been written about Paul Feig’s attempts to prove that women are, indeed, funny in films like Bridesmaids and The Heat and still more has been said about the potential of Melissa McCarthy to break out of the frumpy, fat supporting roles and into the Hollywood A-list.

But anyone who thinks they’re getting stuck with some kind of social commentary in subversive gross-out comedy Spy needn’t worry. This movie is another top-notch, laugh out loud, disgusting comedy that just happens to make some subtle points about how the world ignores middle-aged women.

Melissa McCarthy plays Susan Cooper, a backroom CIA analyst who’s the voice of reason in the ear of suave James Bond-like spy Bradley Fine (Jude Law), helping him to literally know just what’s around every corner through computer wizardry and satellite surveillance so he can fight his way through enemy lairs like a badass.

Inevitably, the retiring Susan is more than a little in love with her debonair counterpart, a fact he exploits shamelessly but apparently unconsciously by taking advantage of her at every turn.

When Fine is taken out by Rayna Boryanov (Rose Byrne in another icily glamourous aristocratic role), the distraught Susan seizes the moment to realise her dreams of being a real spy and avenge his death by tracking the would-be terrorist who claims to know the faces of all the CIA’s top agents. Fellow backroom frump Nancy (Miranda Hart) lends support, while top agent Rick Ford (Jason Statham sending up every one of his action man roles ever) goes rogue and constantly gets in the way.

It could all have been so predictable, but from the moment CIA boss Elaine Crocker (Allison Janney) uncovers an old training tape of Susan kicking ass on The Farm, you realise the main gag isn’t going to be that overweight, middle-aged Susan will somehow fumble her way through.

The joke is that Susan is an incredible agent, smart, resourceful, all the more effective for her invisibility (enhanced by cringe-inducing cover stories that include being a cat lady and a single mother of four). And she's physically well up to the job.

Feig doesn’t pretend that McCarthy’s centre of gravity isn’t where it is or that she wouldn’t ache after a bout of kung fu, but the fight scenes are nevertheless totally believable, particularly when she’s fending off stick-thin model-types with a cast iron frying pan.

All the gross-out scenes you’d expect are there, too, and used to masterful effect. When Susan first kills someone in a rather visceral manner and, quite understandably, loses her lunch all over him, I thought I might be sick myself from laughing so hard.

The supporting cast, and the fact that half the CIA appears to be British, are comedy gold, particularly Statham who stands out in his endless monologues of the things he’s done in the line of duty, such as “shitting out enough microchips to build a computer”.

This is a smart comedy masquerading as a gross-out movie with fat jokes. It has heaps of fun with the spy genre, and should propel McCarthy to a much-deserved spot on centre-stage. ®

One click and you're out: UK makes it an offence to view terrorist propaganda even once

It's here, the 4TB FLASH drive: SanDisk rips sheet from the Optimus MAX

Something for the Weekend, Sir? Something someone showed me down the pub

1980s sci-fi movies: The thrill of being not quite terrified on mum's floral sofa

How the era's films keep their enduring charm ...

Ahh, long weekend. Refreshed? Great, now purge yourself with all the storage you missed

Inexorable tape density, super-fast NVMe drives, and more backup than you can handle