Total worldwide disk storage revenues in the first 2015 quarter were almost $8.8bn, up 6.8 per cent year-over-year, with 28.3EB shipped, which was 41.1 per cent higher year-on-year.

EMC was the super canine, although its revenue share fell 6.7 per cent year-on-year to $1.53bn. Next was HP, with 19.3 per cent growth to $1.28bn; not so very far from EMC’s number and poised to overtake it if these trends don't change. That 3PAR purchase really was very, very good.

But one great quarter is one thing. Having another EMC drop next quarter with HP growing again could be quite another.

Original Design Manufacturers (ODMs) accounted for $1.1bn in sales, 22.9 per cent up on the year and evidence of hyper-scale disk storage growth. The Others category represents $2.67 Bn having grown 23.8 per cent.

An IDC chart shows the changes over the year: 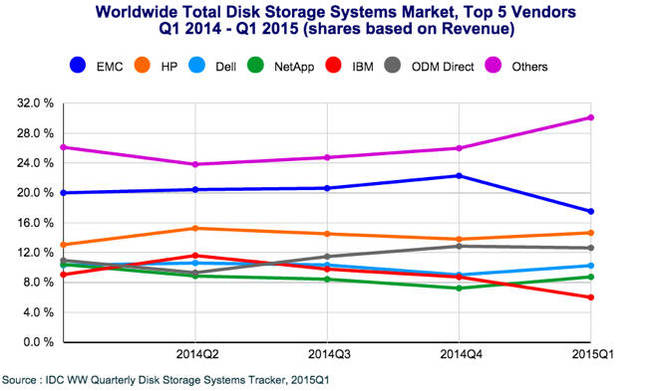 Overall, the big swings were away from IBM, NetApp and EMC, and towards the ODMs and the Others, with Dell, HP and HDS benefitting from smaller swings. ®