Review Of the Chromebook ilk, Toshiba’s original CB30 was one of my favourites from 2014. Slim, light and stylish and, of course, affordable. This year, you’d think that all the company would need to do is refresh a few components and it could keep on going with this design.

Yet with the arrival of Toshiba’s Chromebook 2 that also bears the CB30 moniker, you get quite a different beast. 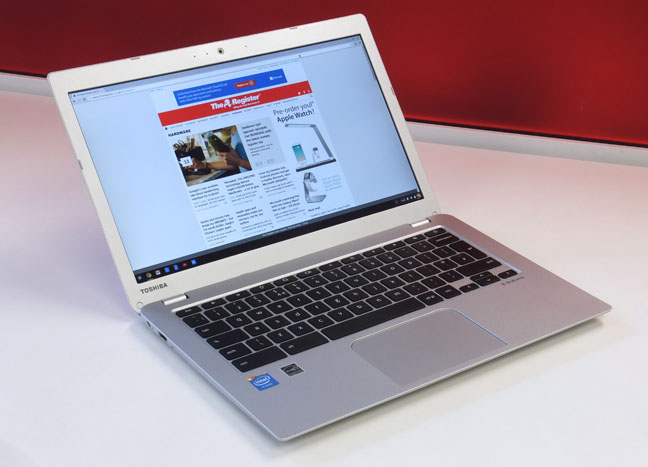 Is that a good thing? Open up the 13.3-inch display though and that’s when you really notice a difference, as the model Toshiba supplied for review is the full HD version equipped with 4GB of RAM.

A cheaper 1366 x 768-pixel display alternative can also be bought but then the memory halves to 2GB, the plus point here being the lower resolution screen has a matt rather than glossy finish.

Back in full HD land and the difference I’m talking about is that Google’s Chrome OS suddenly stops looking like a toy. Or to put it another way, even though it’s the same old, same old, going full HD makes it appear less dated.

More angular than the previous model

Of course, the look of the operating system has nothing to do with Toshiba – there’s not even a logo-emblazoned desktop splash screen, and, more refreshingly, you’re not exposed to the usual crapware that all the PC vendors tout. Norton 30-day trial, where are you?

Still, that’s the idea. Google spoonfeeds you an up-to-date OS every time you log on (with the occasional restart required) and this online working environment is deemed safe, assuming you trust Google. Stop sniggering at the back please.

I’ll admit that I’m still a bit old school when it comes to storage and even though the Toshiba Chromebook 2 has a 16GB SSD on-board, I remain cynical about the 100GB that Google offers for free for two years. Just what does happen to your precious files if you don’t cough up in 2017? Is there a grace period or is it simply do or die? 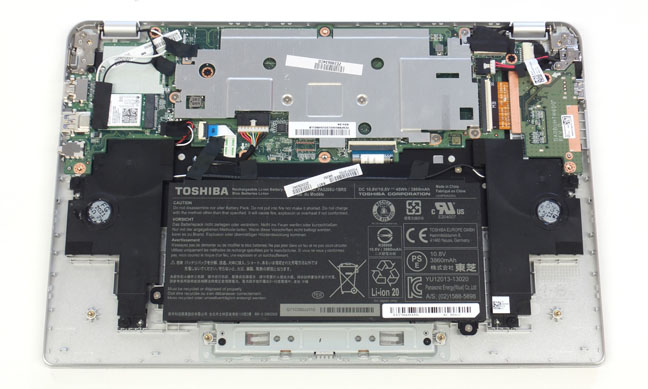 No fan, just a sprawling heatsink. The battery is rated as 45Wh/3860mAh. Click for a larger image

While I might be unconvinced about cloud storage as an ongoing investment as a consumer, I’m not blinkered to the convenience on a more modest scale (read: free) and have actually grown quite fond of the Chromebook modus operandi.

The Toshiba Chromebook 2 has an SD card slot too, which can bolster your storage needs and it doesn’t leave any of the inserted card protruding either.