Apple's HomeKit: So, you know, it exists and all that. Oookay ...

Not exactly a big push, reviving concerns it's in trouble 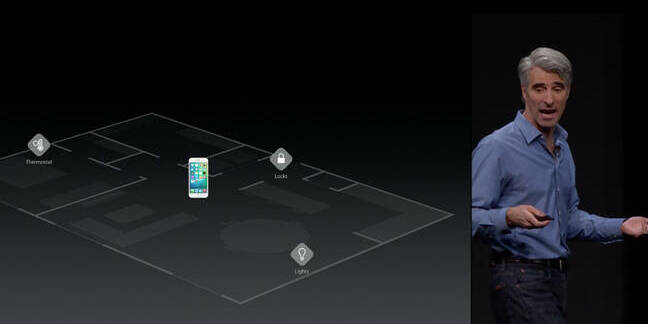 We don't know either, Craig. It's certainly looking a little sparse

WWDC 2015 Apple didn't so much launch as absent-mindedly punt its HomeKit smart home tech this week at its annual Worldwide Developers Conference (WWDC).

In a near two-hour keynote presentation, the Internet of Things hub that Apple hopes will put it in the forefront of the smart house got less than 30 seconds – and a pretty uninteresting 30 seconds, at that.

We learned that in addition to being able to control thermostats, locks, and lights, HomeKit will also been able to connect with window shades, security systems, and sensors of all sorts. Which is similar to saying that your iPhone will now also be able to play music and take pictures. HomeKit will also work natively on your Apple Watch – which is even less interesting.

The one bit of real news that came out was that Apple will let you communicate with your devices through your iCloud account. But that was also a little confusing. Even given a beefed-up two-factor auth in iCloud that should (?) lift security concerns, in order to control your devices through Siri you still need an Apple TV. (Speaking of which, what happened to the fourth generation Apple TV?)

Not only that, but the control mechanism for all of this – the one place you to go to control all the different devices – didn't turn up, either. So while Apple has a new News app for its magazine platform and a new music streaming app, there is no Home app, as yet – which means HomeKit is not a terribly useful or interesting platform right now.

This was supposed to be the big launch of HomeKit, so what happened? To have a guess, we only have to turn to the reports and rumors from last month of problems and delays. Apple went to some lengths to swear that everything was fine with HomeKit and that it would be out in June. It even teed up and promoted the five products that currently work with HomeKit in the lead-up to WWDC. But the fact is that it was supposed to be here and it's not, which means the wheels have come off somewhere along the line.

The information emerging from Cupertino is that the software is just too damn clunky, requiring way too much memory on the devices it hopes to stitch together. This is the big design issue for all smart-home manufacturers. It's why the Nest has a huge battery in it, as does the Ring doorbell. It's also why we have dedicated standards for low-power data sharing (ZigBee and Z-Wave).

For all the wonderful things it does, Apple has lost its ability to be lean, relying on more and more powerful hardware to handle its bloated software. It even knows it – a sizeable proportion of the new announcements at WWDC talked about more efficient and faster software processes.

Apple's entire entry point into the smart-tech market requires it to do two things: one, work seamlessly with other products; and two, allow them to be controlled with ease in a single place (an app, then). So far, neither of these situations exists.

And yet it's been over a year since HomeKit was announced. This is still Apple and it still has an enormous installed user base. Of course it can force an app on billions of people whenever it wants. But every other company that wants to build the much-needed control platform on which all these IoT and smart-home devices will sit – including Google – will have punched the air with joy today. ®