Glass door to the ancient past FOUND ON MARS

Rock-boffins have used data from satellites to scope out impact-crater glass on Mars for a glimpse into its past, based on the theory that glass formed during hypervelocity happenings can encapsulate and preserve earthly bio-signatures.

A study lead by Brown University's Peter Schultz found that organic matter, including plant matter, was entombed by molten glass formed in asteroid and comet impacts occurring millions of years ago in Argentina.

When the study was published, the rock-boffin suggested that something similar could also have happened on Mars millions of years ago.

The paper, Preserved glass-rich impactites on Mars, and published in Geology, is the first step in detecting the existence of impact glass on Mars.

"The work done by Pete and others showed us that glasses are potentially important for preserving bio-signatures. Knowing that, we wanted to go look for them on Mars and that’s what we did here," Kevin Cannon, a PhD student at Brown and the lead author of the new research, said in a press release.

"Before this paper nobody had been able to definitively detect them on the surface," he added.

The hassle of distinguishing impact glass from its surroundings on the Red Planet's surface was immense. It required measuring the spectra of light reflected off of minerals and rocks on the surface, although impact glass unfortunately does not have a particularly strong spectral signal, although Cannon has seemingly found a way to tease that signal out. 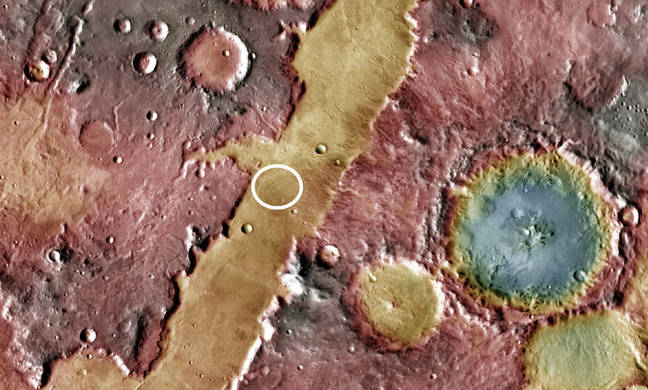 The Nili Fossae trough, a likely location for glass-encapsulated life.

Cannon took to the laboratory to mix up powders with a similar composition of Martian rocks and then fired them in an oven to form glass.

By measuring the spectral signal from that glass, Cannon used an algorithm designed to pick out similar signals in data from the Compact Reconnaissance Imaging Spectrometer for Mars (CRISM), which flies aboard NASA’s Mars Reconnaissance Orbiter.

This technique enabled the boffins to pinpoint deposits around several crater central peaks, the craggy mounds that often form in the center of a crater during a large impact. The fact that the deposits were found on central peaks is a good indicator that they have an impact origin.

"We think these could be interesting targets for future exploration,” said Jack Mustard, co-author of the paper and deputy principal investigator for CRISM.

One of the craters found to contain glass is called Hargreaves, and it is located near the Nili Fossae trough, a 400-mile-long depression that stretches across the Martian surface.

The region is one of the leading landing site contenders for the Mars 2020 rover, a mission that aims to cache soil and rock samples for possible future return to Earth.

Nili Fossae trough is already of scientific interest because the crust in the region is thought to date from when Mars was a much wetter place. The region is also rife with what appear to be ancient hydrothermal fractures, warm vents that could have provided energy for life to thrive just beneath the surface.

"If you had an impact that dug in and sampled that subsurface environment, it’s possible that some of it might be preserved in a glassy component," Mustard said. "That makes this a pretty compelling place to go look around, and possibly return a sample." ®