HGST has cracked the 10TB barrier with a shingled helium drive for active disk archives. Think of it loosely as a shingled He8.

Like the He8, the Ultrastar Archive Ha10 is a helium-filled drive in which platters spin with less friction and vibration than in an air-filled drive.

The same physical drive enclosure can hold more and thinner platters, increasing capacity, because of this.

The Ha10, previewed in September last year, uses SMR recording in which write tracks are partially overlapped, leaving narrower read tracks, as a way of increasing capacity per platter. The write tracks are grouped in blocks separated by inter-block spaces. Re-writing data is a sequential process involving track erasing and writing within a block, which slows down the write process compared to non-shingled drives.

Data reads are random, as with other disk recording technologies.

These drives are intended for archiving data which has a degree of read access and lower write access rates, and needs predictable access performance. It is envisaged that spin-down disks could be used to hold archive data with lower levels of access where users could endure longer data access latency and trade that off against lower operating costs.

The SMR access process is handled by the host application (host-managed SMR) instead of by the drive itself, as drive-managed SMR can exhibit unpredictable access latency – as shown by Storage Review . 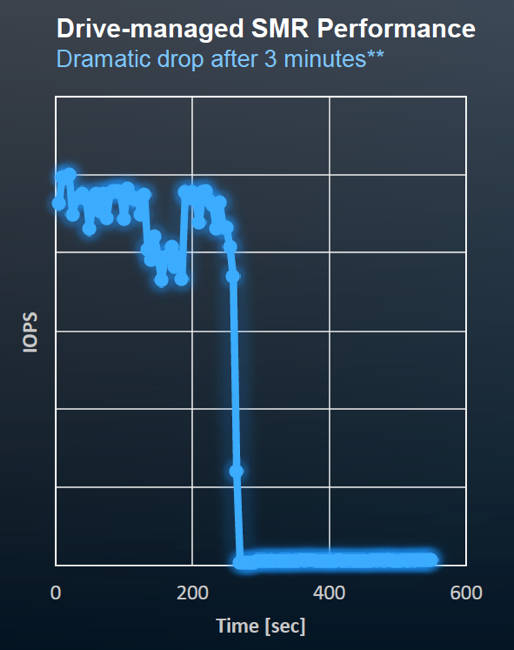 This is HGST's first SMR drive. Seagate has its own, drive-managed, SMR technology which is, we think, being used in an EVault cloud archive offering but is not generally available. HGST characterises Seagate's air-filled SMR drive tech as being desktop drive class, with an 800,000 hour MTBF rating, three-year warranty, and 8TB capacity. 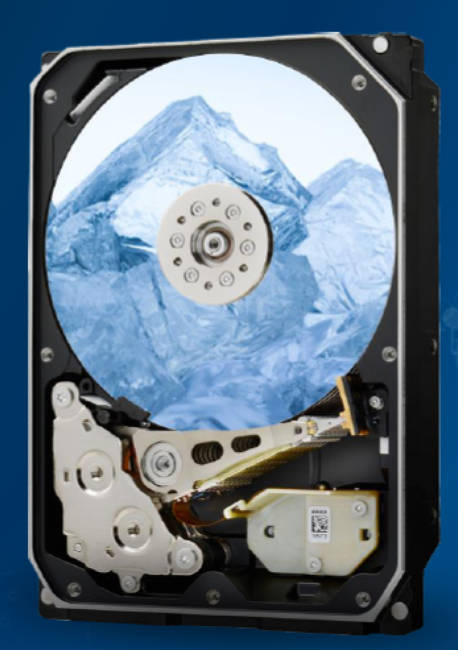 Marketing shot of Ha10 drive. The top platter doesn't really have a picture on it.

HGST says its Ha10 has 25 per cent more capacity than a non-shingled, air-filled drive, with a 20 per cent lower operating power-per-TB need.

As this is a host-managed drive, application software will need to be changed to make use of the drives and it is envisaged that hyperscale archive software providers will do this. Study the chart to see how HGST classifies the level of host software change needed. 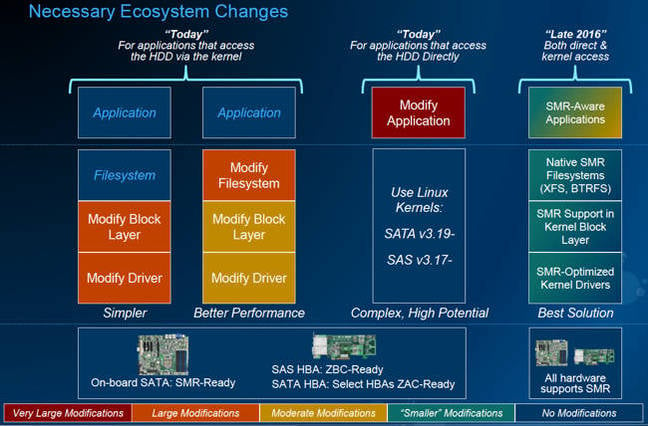 HGST says it's working with both PMC-Sierra and Avago-LSI for HBA support. The product can be expected in the second half of the year.

There is an open source developers' kit at github which ensures new command sets flow through the HBA and also emulates a host-managed SMR drive on non-SMR (perpendicular magnetic recording or PMR) drives.

To have a look at the drive request access through HGST's design registration program.

This 10TB drive is undoubtedly a watershed but doesn't signify broad availability of 10TB drives as it uses shingling, which slows write performance and requires host software changes. HGST anticipates that hyperscale archive service providers is the market to go for, the ones needing to archive social media, online content and backup, medical records, and scientific and digital assets.

Deep archives on disk with data that is read only occasionally (the "last copy") will need another disk drive tech advance to get the costs down to make it preferable to tape – if such an advance can ever be made. ®