Community Edition hits general availability, but so far it's for Amazon's cloud only

Mesosphere DCOS is a platform for running and managing clustered data center workloads that combines Apache Mesos with a mix of open source and proprietary components.

Essentially, it's cloud infrastructure in a box – although the actual resources that make up the cloud could be in a local data center, on a public cloud, or in a hybrid configuration.

A number of prominent companies, including Apple and Twitter, are already running large Mesos clusters. Mesosphere says it aims to let other companies do the same, even if they don't have the IT and engineering budgets of the big players.

"Mesosphere wants bring the benefits of Mesos, and then some, to companies of all shapes and sizes," Mesosphere senior research analyst Derrick Harris said in a blog post announcing the release. "We want to let users build and deploy applications whose components span entire datacenters, but with the simplicity of programming for a single machine."

To that end, Mesosphere has taken the core Apache Mesos software, combined it with other components including Chronos and Marathon, piled on custom web and command line UIs, and made it easier to package and install services to run on the platform. 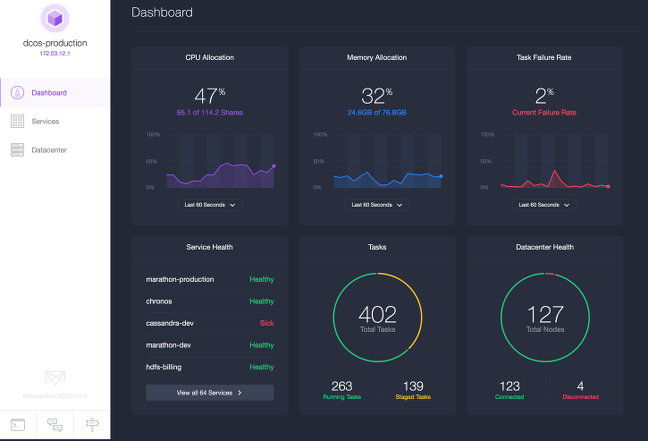 DCOS also supports other popular cloudy tech, including Docker containers and the Kubernetes orchestration software that's beloved by the likes of Google and CoreOS. But while DCOS includes and integrates with a variety of open source technologies, Mesosphere pointedly notes that the combined offering is not itself open source.

DCOS will be available in two versions, including the aforementioned Community Edition that's available at no charge and an Enterprise Edition that isn't.

Additional benefits of the Enterprise Edition include 24×7×365 support, training, installation and configuration help, emergency patches, and support for bare metal, virtualized, and hybrid deployments – although you'll need to contact Mesosphere about a subscription to find out just what all this might cost you.

The catch with the Community Edition, on the other hand, is that you can't download it and use it with your local infrastructure – at least not so far. The idea is that you'll try out DCOS on a public cloud. You can deploy it to Amazon Web Services (AWS) beginning on Tuesday, and support for Microsoft Azure and Google Compute Engine is in beta.

Mesosphere was founded in 2013 and the startup has so far raised approximately $50m in venture capital funding. Among its employees it counts Benjamin Hindman, who began work on Mesos in 2009 while a PhD student at the University of California, Berkeley. Hindman later brought the tech to Twitter – which makes extensive use of it – before joining Mesosphere in 2014. ®