Sailors in waters to the west of the Hawaiian island of Kauai will have just seen a curious sight indeed: a flying saucer screaming out of the sky and smashing into the Pacific.

The craft was NASA's Low Density Supersonic Decelerator (LDSD), a 15-foot-wide saucer-shaped machine hooked up to a huge parachute to test methods for safely and slowly landing science probes and human crew capsules on the surface of Mars.

The Red Planet has an extremely tenuous atmosphere, and slowing down while falling through it is difficult. When the Curiosity rover arrived at Mars, NASA used the then world's biggest parachute to reduce the landing speed. Now the agency needs bigger chutes to slow down larger cargoes. 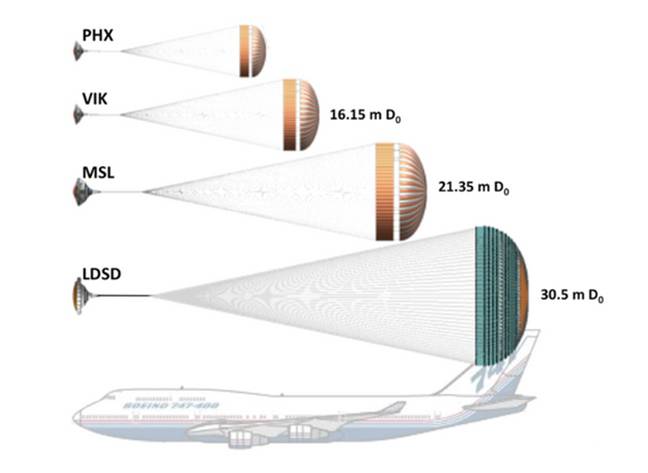 Want something big on Mars? Then best get sewing

The LDSD was tied to a weather balloon and launched successfully – if slightly delayed – on Monday morning at 1130 HST/1430 PDT from the US Navy's Pacific Missile Range Facility on Kauai. It eventually reached an altitude of 120,000ft above sea level. In keeping with NASA tradition, the launch team passed out good luck peanuts* before attempting the second part of the test.

At first the peanuts seemed to work. The LDSD detached from the balloon and thrusters on the sides spun the vehicle to improve its stability. Then the Star 48 solid-fuel rocket in the center of the saucer punched it 60,000ft upwards until it reached Mach 4, or around 1300 metres per second.

At this point the first braking mechanism – dubbed the supersonic inflatable decelerator (SIAD) – deployed. The SIAD is a ring of material around the edge of the LDSD that inflates, increasing its area, and thus the wind resistance, of the craft. It worked perfectly, and slowed the LDSD to around Mach 2.5.

It was at this point that the vehicle should have deployed its supersonic parachute and floated down into the ocean for retrieval. The parachute is the world's largest, over 100 feet in diameter and twice as large as the parachute used to slow down the Curiosity rover on Mars. 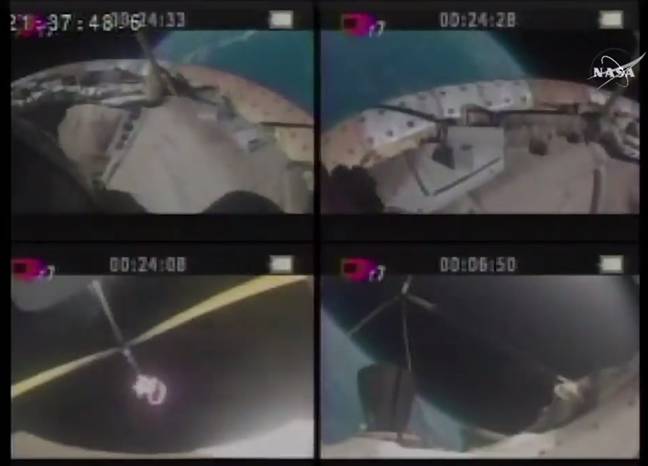 Sadly, the test failed, and the parachute only partially deployed. We don’t know exactly what happened, since NASA cut the video feeds as the LDSD fell below 25,000ft and the test vehicle started shutting down instruments prior to splashdown.

It's possible the saucer survived the impact, although it's likely to have been extensively damaged by the impact. But the data it collected during the test is safe, the agency said.

The LDSD has a black-box flight recorder, a specially toughened canister holding all the instrumentation records for the flight. The black box has its own parachute system and is waterproof, and investigators will be keen to get their hands on it.

It's the second time NASA has tested out these massive parachutes, and the second failure. But better a failure or two here on Earth rather than an expensive probe or capsule full of screaming astronauts plummeting to a rocky end on Mars. ®

* In the early 1960s the Ranger probe mission was trying to land on the Moon so that NASA could scout out the area ahead of a human landing.

The first six missions all failed, either failing after launch, missing the Moon entirely, or smashing down to destruction on the lunar regolith without sending back any photos of the surface.

But the seventh mission succeeded and it just so happened that one of the mission's controllers was munching a handful of peanuts at the time. Since then good luck peanuts are eaten in mission control as a superstitious tradition.

OK sunshine, but put it on-prem