The news editor of Spanish regional television company Castilla-La Mancha Televisión (CLMTV) is herself in the news this week following accusations she persistently abuses her staff with foul-mouthed outbursts.

According to recordings obtained by cowering subordinates, Victoria Vigón regularly offers frank off-camera analysis of her colleagues' work during the daily 2pm news bulletin, which she presents.

Here's the original recording, which is not for Spanish speakers of delicate sensibilities:

Journalists are, according to the recordings, variously described as "airheads", "boring", "stupid" and "useless", among other choice terms.

The station's wardrobe department also cops a verbal Vigón shoeing, as she berates its staff for providing "maternity wear" and failing to adequately address the issue of her cleavage.

Those on the receiving end of Vigón's wrath have not taken these beatings lying down. Last year, they made a formal complaint to the office of the Inspector of Work and Social Security in the regional capital Toledo.

The resulting report (link to PDF in first paragraph here), released at the beginning of this month, concludes that the supplied recordings show "shameful and intolerable treatment, which no-one should have to support, least of all in their place of work".

The report notes that staff expressed their concerns to management at CLMTV at the beginning of 2014, but the powers that be failed to act.

Accordingly, the Inspector of Work and Social Security rules the matter a "very serious" breach of employment law.

In response, CLMTV said: "To record workers of this company in the news control room, during broadcast, without advance warning is a very serious offence."

"We are going to lodge an appeal with the employment authorities and we reserve the right to take legal action against those responsible," it said.

Vigón has a degree is journalism from the CEU San Pablo University in Madrid. Her first job was at right-leaning private radio chain COPE, after which she was appointed to her post at CLMTV by director general Ignacio Villa, who in turn owed his job to the president of Castilla-La Mancha, María Dolores de Cospedal.

There have been accusations that the TV station has demonstrated news bias in favour of Cospedal's Partido Popular (PP), leading it to be dubbed "TeleCospedal". ® 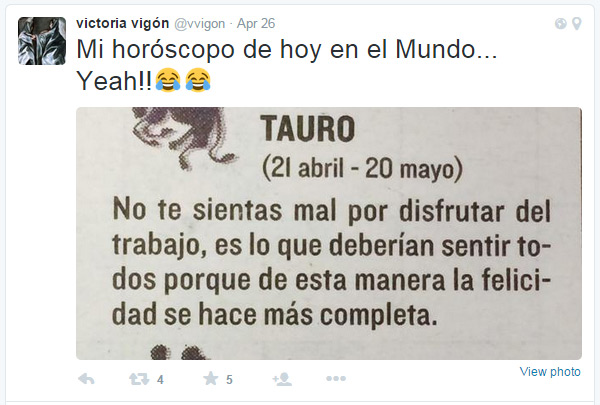 Taurus
(21 April - 20 May)
Don't feel bad about enjoying your work, it's how everyone should feel because this is how happiness becomes more complete.