Sure, we really NEED a €2.50 coin to mark Waterloo, snickers Belgian finance minister

Belgium has taken international trolling to the next level by minting a €2.50 coin to celebrate the Battle of Waterloo.

France had objected to the plan to mint a €2 coin to mark the 200th anniversary of Napoleon's defeat and Belgium duly scrapped 180,000 coins. France said the battle “has a particular resonance in the collective consciousness that goes beyond a simple military conflict”.

But the plucky Belgies didn’t take the French manoeuvre lying down and unearthed an obscure piece of legislation which allows EU countries to unilaterally mint new coins, provided that they are in an unusual denomination. 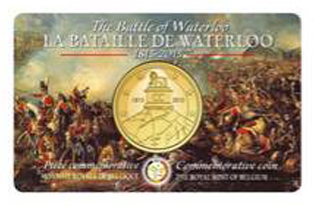 Belgian finance minister, Johan Van Overtveldt said the decision to mint 70,000 of the new coins is not designed to annoy the French – El Reg assumes that was just a happy side effect. Another side effect may be a positive effect on Belgian coffers, as the €2.50 coin costs... €6!

The coins are only legal tender inside Belgium, but can be bought online at www.royalmint.be. ®