Photos fell off the back of a LORRI

Pictures of the surface of Pluto snapped by NASA's New Horizons spacecraft are increasing in quality, as it edges closer to its July sojourn through the Pluto system.

New pics from the telescopic Long Range Reconnaissance Imager (LORRI) taken between 29 May and 2 June show that Pluto is a "complex world with very bright and very dark terrain, and areas of intermediate brightness in between" announced NASA.

"These images afford the best views ever obtained of the Pluto system," said the US government agency.

A study published in Nature earlier this month, based on Hubble images, revealed that Pluto's system is a fairly chaotic one.

New Horizons' astroboffins, who have already taken the first true colour photograph of Pluto, used a technique called "deconvolution" to sharpen their raw, unprocessed pictures that the spacecraft beams back to Earth.

"The contrast in these latest images has also been stretched to bring out additional details," admits NASA.

Deconvolution as a process "can occasionally produce artifacts", said NASA. This means that the team will have to carefully review newer images which New Horizons snaps when it gets into closer range to determine whether some of the "tantalizing details" NASA sees in the images persist. 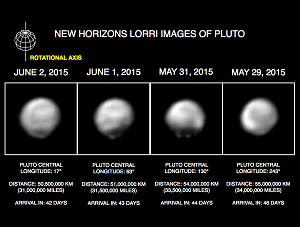 The appearance of Pluto as a non-spherical object in these images is not real; it results from a combination of the image-processing technique and Pluto’s large variations in surface brightness.

“Even though the latest images were made from more than 30 million miles away, they show an increasingly complex surface with clear evidence of discrete equatorial bright and dark regions, some that may also have variations in brightness," said New Horizons Principal Investigator Alan Stern, of the Southwest Research Institute, Boulder, Colorado.

“We can also see that every face of Pluto is different and that Pluto’s northern hemisphere displays substantial dark terrains, though both Pluto’s darkest and its brightest known terrain units are just south of, or on, its equator. Why is an emerging puzzle.”