How much info did hackers steal on US spies? Try all of it

Standard Form 86 reads like a biography of each intelligence worker

Analysis If the latest reports are true and Chinese hackers have managed to pilfer as much data about US government employees in sensitive positions as is thought, the Obama administration may be headed for a serious intelligence crisis.

According to an Associated Press report on Friday, hackers linked to China may have compromised databases containing information related to Standard Form 86, a questionnaire the US government gives to anyone who applies for a job that requires security clearance.

Not that the government relies on the answers you give. If you're applying for a top security job, expect the government to run a thorough background check on you. Assume it's going to find out everything. But the principle of Standard Form 86 is: You go first. Tell us everything.

And by "everything," we really mean everything. Where were you born? Where did you go to school? Where have you worked? And that's just the beginning. By the time you're done with all 127 pages of the form [PDF], there's really very little that you haven't revealed about yourself.

If all of this information is now in the hands of a foreign government, virtually every person working in intelligence or national security for the US government could be subject to blackmail, coercion, or worse.

What's on the form

Do you have any passports, or have you ever had any? In what country were they issued, and what are the numbers? And while we're at it, if the country of origin wasn't the US, do you mind explaining how you acquired these non-US passports?

Come to think of it, you'll need to provide detailed contact information – including home address, phone number, email address, and so on – of three people who know you well, no matter where you've lived. Not that the government doesn't trust you. It's just being thorough.

Are you married? Have you ever been? Let's not mince words, here – "do you presently reside with a cohabitant"? The government will need to know the details, including name, address, and so on. 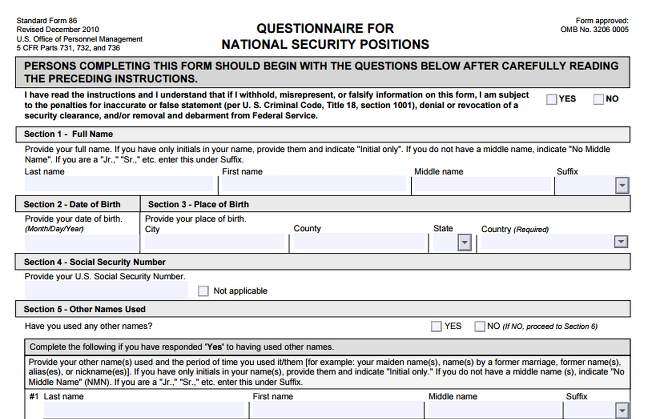 And how about relatives? Who are they, what's the relationship, and where do they live? That includes step-siblings, foster parents, in-laws, and so on. Don't worry, it's just the US government who's asking – it's not like it's going to tell anyone else. Everything is held in the strictest confidence – until China hacks the database, that is.

Have you ever received any kind of government benefits from a non-US country, like financial aid or college loans? Or to turn the tables, have you ever provided any kind of financial support for someone outside the US? Names and contact info, please.

Also, what about foreign jobs? Has anyone overseas offered you one? Asked you to work as a consultant, maybe? Don't worry, we're not talking about your whole life here. The government only cares about the past seven years.

Look, let's just say if you've ever left the country in the last seven years, you'll want to put that on the form. And if you met any dodgy people while you were away – like police, military, or members of foreign intelligence organizations – you'll want to explain that, too.

Next page: And there's more
Page: