Australia needs a bunch more experts in disciplines you're barely allowed to discuss here, according to the Australian Federal Police.

AFP cyber crime commander David McLean told the Australian Broadcasting Corporation's TV program 730 that “this April alone there was over 3,500 reports from people around Australia in relation to perceived cyber criminal events”.

That, he said, is putting law enforcement to the test, because it's difficult to get enough people to investigate computer crimes.

“We as an organisation have a current and an increasing demand for higher-level skills to help support us and our cyber crime operations,” he told the program.

“There's not a large workforce - or not a large available workforce out there, in our experience. Getting suitably skilled and qualified and experienced people to support us in our work is quite difficult.”

That's led agencies to follow in the footsteps of other countries, like the US, and start seeking recruits from among the local hacker communities. The report claimed that as well as the AFP, the Australian Cyber Security Centre (lead agency: the Australian Signals Directorate) is looking to swap hackers' hats from black to white.

+Comment: Vulture South would note that it's hard to train people in these skills in the light of day, when some of their skills are tightly constrained.

There's an ongoing debate in Australia over the handling of cryptography under the Defence and Strategic Goods List, which at the very least tightly regulates publication of, and therefore research into, cryptography (among many other things).

That argument has now reached academic site The Conversation, where Monash University mathematics lecturer Daniel Mathews complained that the controls could endanger the teaching of cryptography.

The 730 story is special for other reasons. Vulture South was quite tickled to note that the May conference the reporters attended, where “skills are shared in secret”, manages a quite public Platinum sponsor (see below). ® 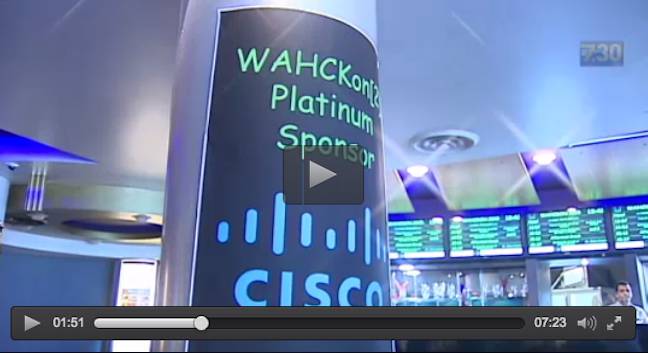