Australia's comms regs broken says Vodafone (as it would)

'BT doesn't overcharge for mobiles' – what's wrong with this picture?

That's the conclusion of a study which reckons a fixed-line customer buying from Telstra is paying AU$20 too much each month, or $9 per month for mobile services.

The Vodafone-backed report, authored by the Centre for International Economics, calls for: regulated transmission prices to be set at cost by the ACCC; better access for Telstra's competitors to regional spectrum, and better enforcement of fixed-line access regulations.

Perhaps controversially, the group also wants the universal service obligation (USO) overhauled. Under the USO, companies that hold a carrier license pay a fee (based on their telecommunications service revenue) into a USO fund.

The notionally-contestable USO funding has always been dominated by Telstra, something the rest of the industry resents as a subsidy to the incumbent – a criticism the report also makes about the Telstra-NBN funding arrangements.

Access to Telstra mobile base stations is also a sore point for the industry, since pricing for co-location isn't regulated by the ACCC.

The group also wants consumers to pay more attention to the competitive sector in choosing their next phone, broadband or mobile plan, saying customers seem reluctant to switch to better-value services. ®

Comment: More competition is undoubtedly a good thing, but some aspects of the report seem over-egged.

However, some aspects of the report seem disingenuous to Vulture South – most particularly, its repeated assertion that BT has no incumbency advantage in mobile services.

That's because BT exited the mobile business in 2001, spinning off what is now O2 to pay down debts incurred during the heady days of the dotcom bubble.

BT has only just decided that it wants back into the mobile market: it announced a 4G SIM-only offer in March, and is in the process of acquiring the Orange/T-Mobile spawn EE.

Vulture South also notes that in calculating the premiums paid by Australian customers, a bunch of providers that are mere resellers are swept up in the dataset. For example, there's this chart: 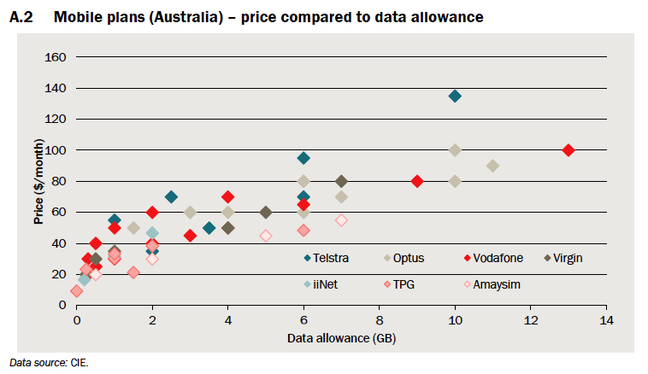 We can't tell you whether the UK data (for example) includes a similar number of MVNOs, because there's no equivalent chart in the report for the UK (or for that matter, New Zealand).

Vulture South doesn't find that much to object to in the competitive suggestions the CCC puts forward, but would encourage the group to be more transparent with its source data. ®

Updated Nathan Simington not qualified, they claim, and installed to create deadlock

With depressing predictability, FCC boss leaves office with a list of his deeds... and a giant middle finger to America

Analysis A last gasp for the era of alternate facts