Space 'scope spots an exo-stratosphere for the first time, warns of Titanium rain

The venerable Hubble Space Telescope has helped identify an exoplanet's stratosphere for the first time.

Since NASA's press release about the discovery calls the WASP-33b stratosphere a “sunscreen” for the planet, El Reg won't even speculate what that temperature would be like, but for the temperature inversion detected by Hubble.

As NASA explains, the stratospheric layer it reckons exists around WASP-33b has a characteristic in common with those around Earth (and other local planets): temperature increases with altitude (rather than falling, as happens in the troposphere).

Since the planet is far too hot for the ozone around Earth or hydrocarbons around Jupiter and Saturn, the NASA researchers suspect the exoplanet's stratosphere, and possibly its rain, are the molecule titanium oxide.

The stratosphere's existence was deduced from observations of occultations of the planet, made with Hubble's Wide Field Camera 3.

The researchers say the spectrum they observed is best explained by the presence of the temperature inversion associated with a stratosphere – something that would also explain why the planet's atmosphere doesn't boil away into space. 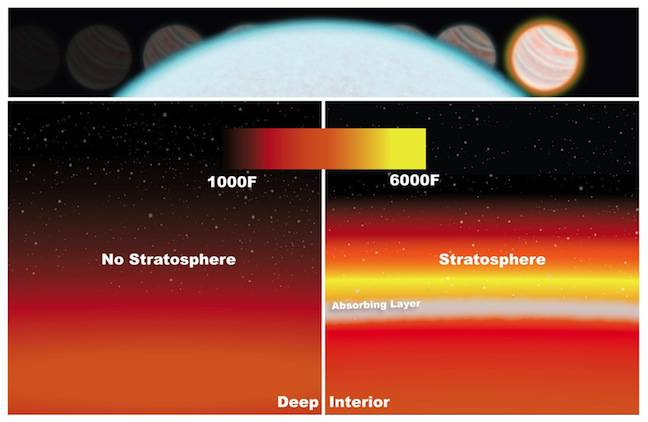 As the NASA release notes, the titanium oxide is “one of only a few compounds” that absorbs both visual and UV radiation and can stay in gaseous form in such a hot atmosphere.

The research, published in the Astrophysical Journal, is also available as pre-press at Arxiv. ®