Review Cinnamon is best known as one of the two default desktops for Linux Mint, which is fast approaching its next major update. Mint 17.2 will include the brand new Cinnamon 2.6, just released, when delivered later this year.

So far, so standard – only Cinnamon is no longer just a Linux Mint desktop.

Cinnamon is now available directly as part of Debian 8 and Fedora 22. Naturally, Cinnamon will work with many other distros as well, but its inclusion in the default installers for big names such as Debian and Fedora marks a turning point for Cinnamon: this really is no longer just an "alternative" desktop for a single distro.

While Cinnamon continues to grow and has become a part of several distros, it is still very much a part of the Linux Mint project and Linux Mint remains the only distro to offer Cinnamon as the default desktop. But it's also becoming something bigger as well, something that's clearly proving popular with users. 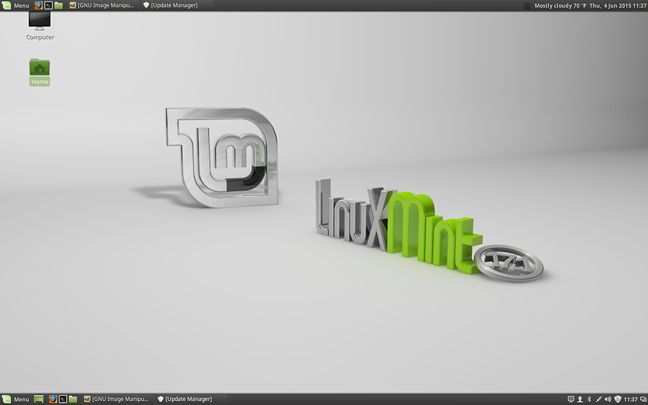 Part of that growth in popularity is no doubt related to Cinnamon sticking with the traditional desktop paradigm – panels with applets, a start menu and system tray.

While some will find that "old fashioned", clearly there are plenty of users looking for just that in a desktop. Indeed, Cinnamon would be my top pick for Linux newcomers, especially those looking to get off the now long abandoned Windows XP.

There's good reason too. Cinnamon manages to offer a desktop experience that's both familiar and yet feels modern.

Cinnamon 2.6 is a major update that builds on the previous release while adding much improved support for dual monitors, better panels and some speed improvements that will make your desktop experience a bit snappier.

Some of the attention developers have been giving Cinnamon is likely a result of Linux Mint sticking with Ubuntu 14.04 as its base for two years. That means that Mint has been able to concentrate on things other than compatibility with upstream packages. Among those other things is the Cinnamon desktop.

Cinnamon 2.6 isn't a radical departure, but it does have some very welcome new features including much better multi-monitor support, particularly when it comes to the Cinnamon panels.

The panels in Cinnamon were previously one of the least configurable elements of the desktop. That changes in this release. Panels can now be added, deleted and moved around independently. That means you can put your panel at the top of the screen if you like. If you have dual (or more) monitors, you can easily set up your monitors to have entirely separate panels.

You can even copy panel settings and paste them onto a new panel. You can also move a panel wherever you like. 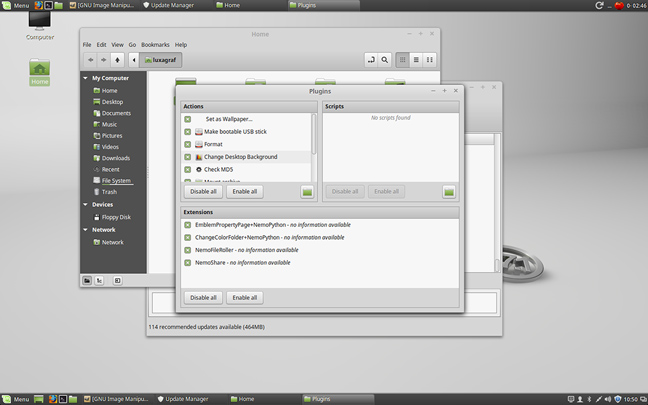 The new plugins manager for Nemo in Cinnamon 2.6

Panels in Cinnamon 2.6 also have a new hiding option dubbed "Intelligently hide", which means the panel is always visible until a window moves into its space as which point it slides out of the way.

Applets are also a bit smarter, particularly with regard to multiple monitors. For example, the windows list applet now only shows the windows in the current monitor.

The Cinnamon System Settings app continues to get refined and simplified. This time around the Power Management, Brightness and Batteries panels have all been combined into a single Power Management panel.

Some system defaults have been improved as well, for example if your hardware supports it, two-finger touchpad scrolling will automatically be turned on when you install Cinnamon 2.6.

The System Settings app also gets some flashy new transitions between panels. I'm not a huge fan of animations, but in Cinnamon 2.6 they're fast enough that you're not losing any time and in some cases they make it much more obvious that something has changed on the screen.

There are also some welcome changes in Nemo, the default file browser for Cinnamon. Nemo now has a new plugin manager that makes it easy to enable and disable extensions, scripts or "actions".

There are a lot of third-party scripts and actions out there, as well as those provided by Linux Mint – including some very nice tools for working with Dropbox or quickly opening a Terminal session – and with this update it's much easier to install and manage them.

It's worth noting that Nemo has been patched to work with Ubuntu's Unity as a drop-in replacement for the Nautilus file browser, which, despite Ubuntu's patches, seems to get more and more crippled with every GNOME update. 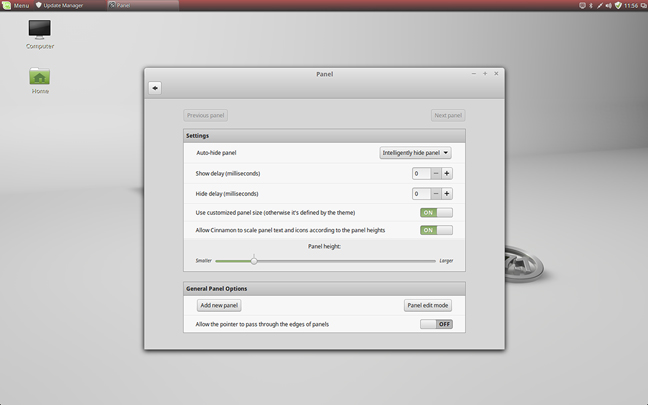 System Settings with options for panels in Cinnamon

Under the hood, Cinnamon 2.6 sees a number of improvements that should speed up your desktop experience and be a little less resource intensive. The menu item, for example, now refreshes much less often and the recent files feature has been revamped to use fewer resources. See the Linux Mint Segfault blog for full details on all the speed improvements in Cinnamon 2.6.

I've tested Cinnamon 2.6 with Mint 17.1 (via the Romeo repositories) and Fedora 22, and found it to be stable in both. There were some occasional glitches and visual oddities in Fedora, but nothing show stopping.