Did climate change scare off vegan dinos for millions of years? 'Yes'

Terrifying beasties couldn't find a nice salad to chomp on

Dinoboffins may have discovered why prehistoric giant lizards avoided the tropics for 30 million years, and thus solved a great fossil mystery.

Research from the University of Southampton and its international partners sheds light on why the biggest dinos from the Triassic period took more than 30 million years to populate the tropics.

In a paper titled Extreme ecosystem instability suppressed tropical dinosaur dominance for 30 million years, which was published in the Proceedings of the National Academy of Sciences, the research suggests that an unstable climate – which the boffins link with elevated levels of CO2 – was to blame.

The instability is characterised by the scientists as involving "wet seasons in some years and extreme droughts in others," which was "punctuated by raging wildfires every few dozen years that reached temperatures of up to 600° Celsius."

These conditions would have provided an extraordinarily difficult environment for vegetarians to proliferate, specifically affecting the vegetation which the well-known Jurassic sauropods (such as Brachiosaurus, Diplodocus and Brontosaurus) would have fed on.

"The conditions would have been something similar to the arid western United States today, although there would have been trees and smaller plants near streams and rivers and forests during humid times," says lead author Dr Jessica Whiteside of the University of Southampton. "The fluctuating and harsh climate with widespread wild fires meant that only small two-legged carnivorous dinosaurs, such as Coelophysis, could survive." 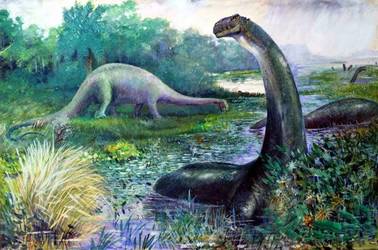 The boffins took rock samples deposited by rivers and streams between 205 and 215 million years ago, during the Late Triassic Period, in a fossil rich area in New Mexico.

Co-author Dr Sofie Lindström, of the Geological Survey of Denmark and Greenland, said: "When these rocks were deposited during the Late Triassic, northern New Mexico was very close to the equator at about 12° north in latitude – around the same latitude as the southernmost tip of India sits today."

The rock samples were crushed and analysed. Through the separation of the isotopes of the elements carbon and oxygen using an electromagnet, and counting them with high-precision detectors, the boffins were able to ascertain changes in ecosystem productivity and estimates of atmospheric CO2 levels.

Co-author Dr Randall Irmis, a palaeontologist at the Natural History Museum of Utah and assistant professor at the University of Utah, said: "Throughout this period, levels of CO2 were four to six times higher than the levels we observe today, but the findings do indicate that if we continue our present course of human-caused climate change, similar conditions could develop and suppress equatorial ecosystems."

Dr Whiteside concluded: "This is the first multi-proxy study of climate and associated faunal change for this ecosystem, containing an extensive vertebrate fossil record. For the first time, we can examine the interplay between climate change and ecosystem evolution at low latitudes, shedding light on what had been a major unresolved aspect of the rise of dinosaurs."

The study was funded by the US National Science Foundation and various other bodies. ®