This being LOHAN, we couldn't have everything going exactly according to plan, and there were some issues with the radio. We'll let Tridge explain:

The radio setup was a RFD900 running at 27dBm on the ground station, with a 6dBi yagi. The payload in the balloon had a RFD900u running at 15dBm.

This graph shows the comms quality for the test flight: 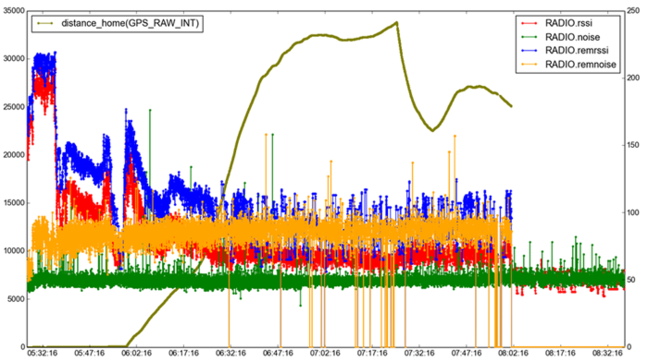 The red and green lines are the signal strength and noise levels in RSSI units as seen at the ground station. A link can be maintained as long as the red line stays above the green line. It shows that a good link from the payload down to the GCS was maintained over the whole flight, with only a few very brief periods where the link dropped (you can see when the link dropped when the yellow line goes to zero).

On the far left of the graph you can see where the noise level in the payload suddenly jumps shortly after the system is turned on. That is likely a sign that some other pieces of equipment in the payload was switched on at that point and was radiating a lot in the 900MHz band. To improve the communications link we need to identify what piece of equipment this was and reduce its level of interference.

If that noise hadn't been introduced then the blue line would have been above the yellow line the whole flight and we could have had continuous two-way link. As it was, we ended up with a one-way link for large portions of the flight, as RF noise in the payload blocked incoming signals from the GCS. So we knew exactly what the vehicle was doing, but we wouldn't have been able to change the settings in the Pixhawk reliably if we needed to.

Still, it was a good result and the RFD900 radios performed extremely well. Congratulations to Seppo from RFDesign.

Yes indeed. We're working on fixes for the laptop USB power draw issue, and attempting to identify what was causing the interference. When we've nailed it, we'll resolve the problem.

We had a few LOHAN fans expressing concerns that the radio might interfere with the Pixhawk's GPS unit. No so, according to the data logs which show a good fix with generally 11 or 12 satellites for the entire flight. 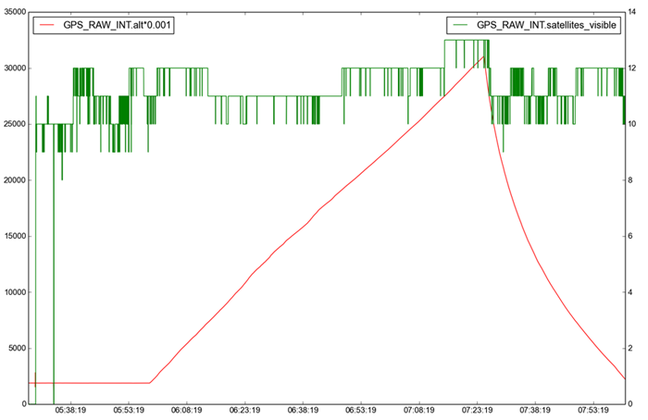 It's worth mentioning that the Vulture 2 has two vertically-opposed GPS units, just in case the aircraft finds itself on its back. Highly unlikely of course, but still...

Next page: Other sensors
Page:

A particle physicist, an astronomer and a cosmologist meet in a bar. You what, COSMA8?
HPC6 Dec 2022 | 1

'Acute and justifiable fear' in the way patient data is set to be processed, campaigners warn
Databases6 Dec 2022 | 4