There are pluses, though. The primary feature of Surface is its combination of compact size with the ability to do a fair impersonation of a laptop, mainly thanks to the clever keyboard cover, a very thin detachable keyboard that offers some protection when folded over the screen. Once you have enjoyed its small size conventional laptops and even most ultrabooks (slim PC notebooks) seem annoyingly bulky by comparison.

Surface is a tablet though it is more frequently seen used like a laptop. The reasons include touch app shortage and that users buy Surface to run Office and other desktop apps. Still, the touch screens have always worked well, and the tablet personality has its uses.

Microsoft designed the Surface range to showcase Windows 8, but as Windows 8 is giving way to 10, Surface is also retreating from the Windows 8 concept. Surface Pro 3 was the first to show this, with a larger 12” screen which departs from the earlier 16:9 aspect ratio. It's designed to work nicely with the Windows 8 “Snap” feature for multiple apps on screen. The problem with 16:9 is that it feels awkward in portrait mode, being tall and thin.

The Surface Pro 3 has a 3:2 aspect ratio with a lovely 2160x1440 screen. It is a great laptop replacement but a little too large for mobile tablet use, showing how the desktop is now getting priority.

That brings us to Surface 3, on which this review is being typed using Windows 10 and Word Preview, one of Microsoft’s free “Universal Office” apps. Surface 3 runs a quad core Intel Atom x7-Z8700 at 1.6GHz, which is capable of bursting to 2.5GHz.

Atom is Intel’s low power chip for embedded and mobile devices, and a high-end Atom offers reasonable performance while remaining power-efficient. The Surface 3 is the successor to the failed Surface RT range, with lower price and a long battery life. It's not, however, intended as a desktop replacement or MacBook competitor. 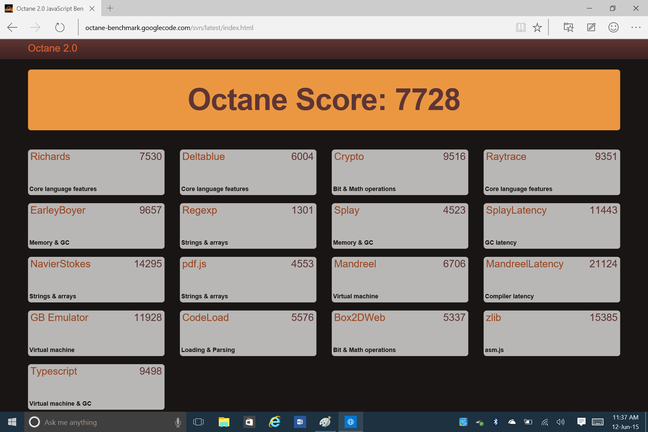 How good is Surface 3 performance? The short answer is that it plenty good enough for everyday work, though no powerhouse. Google’s Octane 2.0 benchmark scored 4262 in a quick test, when run in Internet Explorer 11, rising to 7317 in the Edge (Project Spartan) browser. The Core i5 Surface Pro 1 achieved 6247 on the same test, with IE11.

Graphics and gaming is the weak point. Surface 3 can manage about 20 FPS with 20 fish in Microsoft’s FishGL demo, whereas Surface Pro 1 does 43 FPS. Nevertheless, Surface 3 is a long way ahead of the Surface 2 (ARM Tegra 4), which it replaces: 2360 on Octane 2.0 and nearer 17 FPS on FishGL even with fewer effects enabled.

There is also a single USB 3.0 port, a micro USB port for charging, microSD slot, mini display port, and front (3.5 MP) and rear (8MP) cameras. USB charging is a plus, though it charges more quickly using its dedicated charger. The compact size of Surface 3 is ideal for travellers.

A pen is an optional extra and useful for handwriting or sketching in apps like OneNote, or for designers and artists working with drawings. Clicking the top of the pen opens OneNote, except that this does not work in Windows 10 currently; presumably this will be fixed before launch. There is nowhere to attach the pen, unless you buy the optional pen loop which sticks (not strongly enough) to the keyboard cover.

Surface 3 is a nice Windows tablet, though a problem is the premium you pay for its portability. The Surface 3 that you want, with the larger RAM and SSD plus a keyboard cover, comes to £608.99 inc VAT, or £653.98 if you want the pen.

That would buy you something like, say, an HP Envy 15, a 15" laptop with Intel Core i5, 1TB hard drive, 8GB RAM, NVidia GEForce GT 840M graphics and four USB 3.0 ports. You don’t get a touch screen or pen, though, and if you need the pen capability then Surface 3.0 suddenly looks good value.

Microsoft fiddled with the design of the keyboard cover for Surface 3 and Pro 3. In order to make it more rigid when used on a lap, there is now a little section that folds back along the bottom of the screen. This is a compromise though, since in this position you cannot easily tap icons on the taskbar. The solitary USB port is another issue; it is a shame Microsoft cannot find room for a second one.

Next page: Surface 3 and Windows 10
Page: