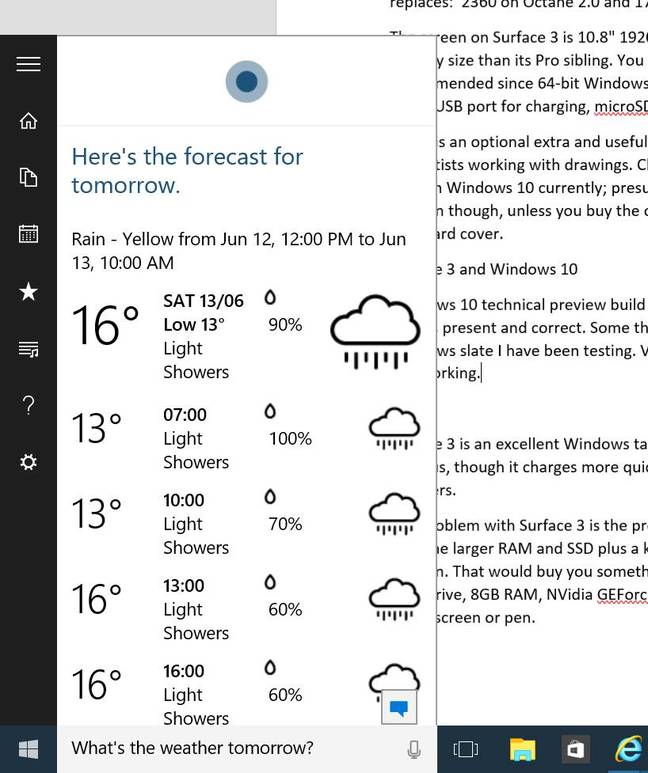 Cortana reports the weather in response to voice input

Some things mysteriously work better on Surface 3 than on another Windows slate I have been testing. Voice input works in Cortana, for example; the first time I have seen this working. I asked “what’s the weather tomorrow” and was rewarded with a nice little chart, though with "yellow rain", whatever that means.

Another working feature is Continuum, which prompts for Tablet Mode if you fold back the cover. Tablet Mode, though, is still not as good as Metro in Windows 8. Icons on the taskbar are too small for comfort and the taskbar is now always present.

The new Start menu is better integrated with the desktop, but for tablet users the old Start screen was easier to use. The new “all apps” list on the left side is more fiddly than the old full-screen list. The solution is to make sure you pin the apps you are likely to use to the Start menu.

“Snapping” apps side-by-side still works in Windows 10 but using different gestures. Let’s say you are working in Word Preview and want Calculator open alongside it. You drag the Word Preview title bar down and left, until a shaded box appears on the screen indicating that you are about to snap the app right. Release the title bar, the app fills half the screen, and you can now select Calculator (if it is running) or use the Start menu to open it, whereupon it fills the other half of the screen. You then drag the divider to your taste.

Tablet Mode is primarily a full screen mode though, and one thing that works well is a swipe in from the left to change apps (a loose equivalent to Alt-Tab though slightly different). Half the problem for tablet users is that those now used to Windows 8.x have to learn new ways to work, since Microsoft has discarded so much of the UI.

The new team is also more desktop-focused – as evidenced by the recent decision to scrap the “Modern” Skype app – which means that tablet users are somewhat neglected.

Microsoft has changed the on-screen keyboard in Windows 10. There is a new split view designed for thumb typing on a tablet. This is a nice way to show more of the document, though from my experience, getting a decent typing speed is challenging. However there is no sign yet of the excellent Word Flow keyboard found in Windows Phone, which lets you form words by tracing your fingers from letter to letter. 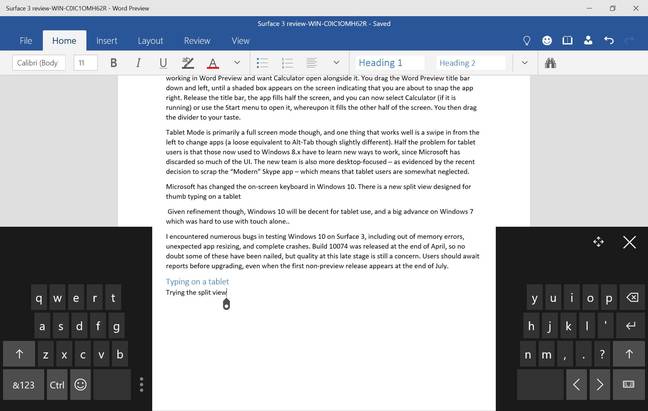 The split keyboard is meant for thumb typing

A big reason why Windows 10 will be better than its predecessor for Surface and tablet users is the arrival of Universal Office. You get Word, Excel and PowerPoint, in touch-friendly versions with enough features for most day to day use. Word, for example, supports features including paragraph styles, images, shapes, tables, page numbering, change tracking, multiple columns, endnotes and citations as well as usual word processing functions.

You have to live without things such as grammar checking and Visual Basic macros, but it does make a strong tablet word processor, presuming Microsoft fixes bugs like saving a copy to OneDrive and finding an empty document. This may be more to do with the notorious OneDrive than with Office itself.

Talking of bugs, I encountered numerous examples in testing Windows 10 on Surface 3, including out of memory errors, unexpected app resizing, and complete crashes. The test Build 10074 was released at the end of April, so no doubt some of these have been nailed, but quality at this late stage is still a concern.

OneDrive is poor, and not only because of the lack of the Windows 8 placeholder feature that let you see all your files while only downloading what you need. Windows 10 also prompted regularly for me to "verify my identity" by re-entering my Microsoft account password. Users should await reports before upgrading, even when the first non-preview release appears at the end of July.

Strangely, the effect of reviewing Windows 10 on Surface 3 is to make you better appreciate the maligned Windows 8. It may be irritating on a desktop, but for tablet use Windows 8.1 works well, the gestures feel natural and the "immersive" user interface is great for web browsing. Windows 10 feels rougher, not only because of bugs in the preview, but also because restoring a desktop focus has made the tablet experience worse in some respects. Of course, we will be sure to revisit this when the final version is available.

Still, Windows users have to work in the desktop most of the time, since that is where the applications are, and Surface 3 users will want to upgrade once the bugs are squashed, especially considering that Universal Office is so well suited for this device. ®