Fess up: which one of you Galaxies made all that gas?

It's not yet fully operational, but the Australian Square Kilometre Array Pathfinder (ASKAP) is already giving astro-boffins surprises.

With one-sixth of its antennas operational, and only a quarter of the beam-aiming of the final facility, the Pathfinder has helped a group of astronomers to work out that there's a surprising amount of neutral hydrogen (HI) floating around the inter-galactic space in a group called IC 1459.

Lead author of this paper at Arxiv, Paolo Serra of the CSIRO-run Australian National Telescope Facility, told Vulture South the presence of HI is a marker of whether a galaxy is going to be interesting to look at.

HI is a basic building block, Serra says, because “if you don't detect any around a galaxy, that galaxy is 'dead' – not much will happen”. 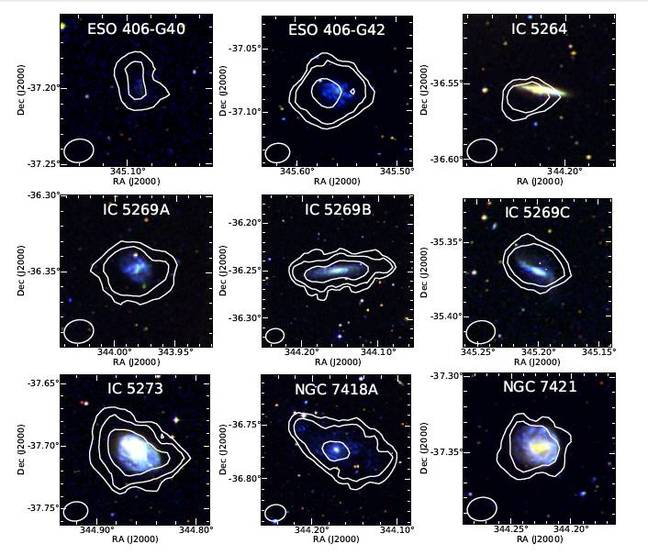 The white contour lines show the HI gas clouds around the galaxies in the study. Image: Serra, et al

Most of the HI is held in the galaxies by their gravity, but some is in inter-galactic space, and in galactic groups, and is thought to indicate interactions between galaxies.

In this particular study, the group surveyed a quite large area of the sky – six square degrees with one arcminute resolution – to measure how much of three HI clouds in the IC 1459 group is inside galaxies and how much outside.

“We found three distinct clouds outside galaxies, each with the mass of a billion suns*”, Serra said.

Serra said two of the clouds are quite close to a particular galaxy in the group, known as IC 5270, and represent about 15 per cent of the gas within that galaxy. Across the three clouds and eleven galaxies, “we found … about ten per cent of the gas lives outside the galaxies”.

That, he added, represents a lower boundary for the mass of the stray HI: when ASKAP is fully commissioned, it will have 36 antennas instead of the six Serra's group used, and will be able to be “beamed” in 36 directions simultaneously (that those two numbers are the same is pretty much coincidence, he said).

“[T]he full ASKAP will be able to reach the same column density sensitivity of our 30 hour observation (inclusive of the shortest baseline) over a 5 times larger area of the sky and with twice the angular resolution in just a few hours”, the paper states.

The survey isn't just important as astronomy. Serra said the early work also helps groups like his understand the computing workloads that ASKAP's going to create (and, in the longer term, the full Square Kilometre Array project that Australia is sharing with Africa).

The Pawsey Centre hosts the supercomputing for Australia's SKA contributions, and for this project Serra said the analysis was conducted on its Galaxy machine.

This, however, was a relatively small dataset compared to what ASKAP will eventually deliver – it could have been processed on a desktop, Serra said.

At full scale, only Pawsey's HPC machines will be able to handle the workloads, but the sort of work being done during commissioning is helping astronomers understand their software requirements.

“Right now, we are commissioning the telescope – we have to make sure the hardware on site is working,” Serra said.

Projects like this one help “understand the data that comes from the instrument”, he said – and the analysis done on smaller scale data sets means “you can use the old software as the benchmark” to make sure things are working when everything is scaled up to ASKAP's eventual firehose of data. ®

+Correction The original version of this story said "a hundred billion suns", which Paolo Serra has corrected to "a billion suns". Even with an order-of-magnitude slip in the transcription, he says, "it's still spectacular". Sorry for the mistake.