More polished, but a bit slow and buggy

First look Microsoft has released Build 10136 of Windows 10 Mobile, part of the “One Windows” wave set to be released later this year.

Windows 10 for PCs is due on 29 July, but the phone version is likely to follow later. It's just as well, since this build still does not feel release-ready, though progress from the last build is dramatic and the operating system now looks better and works more smoothly.

The main deficiencies are with performance overall, and bugs in specific apps. Performance is inconsistent; on first installation of the update the test phone (a Lumia 830) was slow and jerky, but part of the problem was that most of the apps were still installing, even essentials that you think of as built-in.

Even after leaving the phone overnight, the beta Store showed 29 pending downloads and it took some coaxing to get the downloads to complete.

Once done, performance matched the claims of Microsoft Insider head Gabe Aul: “App launch performance is slower on 10136 than 8.1, we’re tuning that. Overall performance should be on par or better.”

According to Aul’s official post the main changes in this build are “fit and finish”, and it is true that there are many fewer instances of chopped off text or other obvious faults in the OS and its key apps – though I did spot “View Calend” if you use Outlook in portrait view.

This is challenging for Microsoft, since the idea of the Universal Windows Platform — and yes, that is currently its official name — is that you create a single app that works on all devices from PC to phone, designing a user interface that adapts to the screen size. Problems like truncated text are typical with this approach.

Another obvious change is that the PIN pad on the lock screen is now transparent, and this, along with transparent tiles on the home screen, gives a fresh modern appearance.

This build is meant to have a new feature that makes it easier to access a top left “hamburger menu” on devices with 5-inch screens or greater. Press and hold the Start button and the screen slides down so you can reach the menu with one hand, press and hold again to slide it back up. 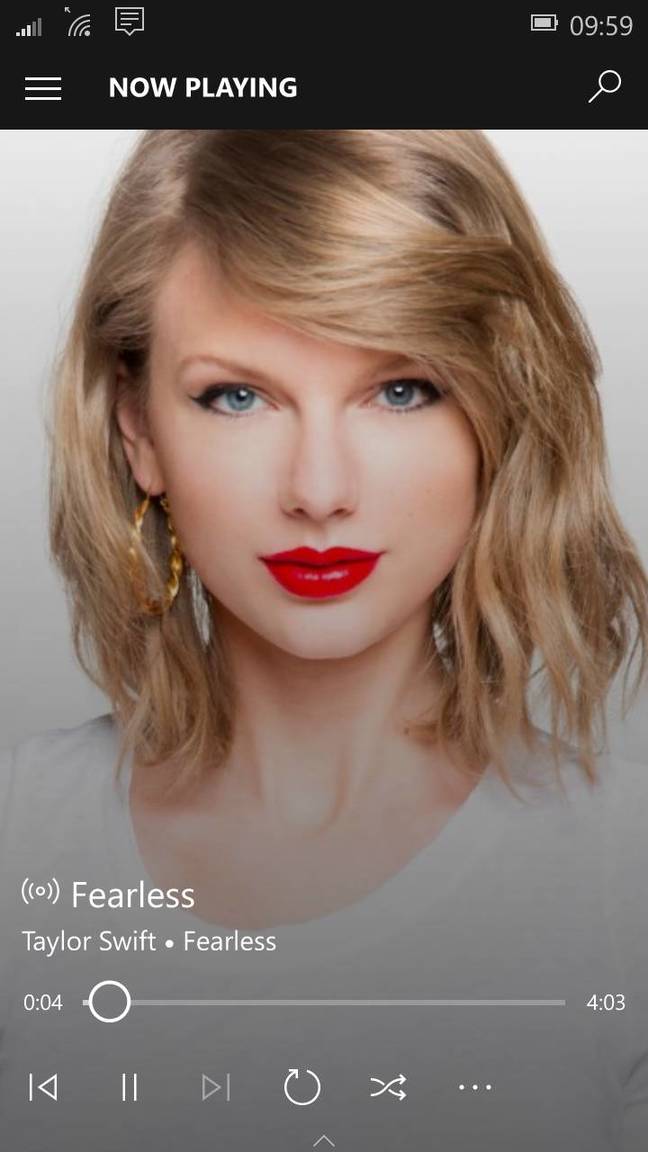 Playing a track from OneDrive on Windows 10 Mobile

The highlight of Windows 10 Mobile is how good the first-party apps have become, or rather how good they will be if and when the bugs are sorted.

The Photos app integrates with OneDrive cloud storage and this build restores a feature of the old app, where you tap a month to jump to all the images from that month, making it easier to navigate.

The Music app also links to OneDrive. You can upload MP3, M4A or WMA files to stream them on your phone, provided they are not DRM encumbered. There is a download option if you need this to work offline.

The Microsoft Office applications, not available in Windows Phone 8.x, are impressive. Using them on a small phone, the issue is not whether features are missing but whether Microsoft has gone over the top in providing features like footnotes and endnotes in a word processor running on a device with a 5-inch display. 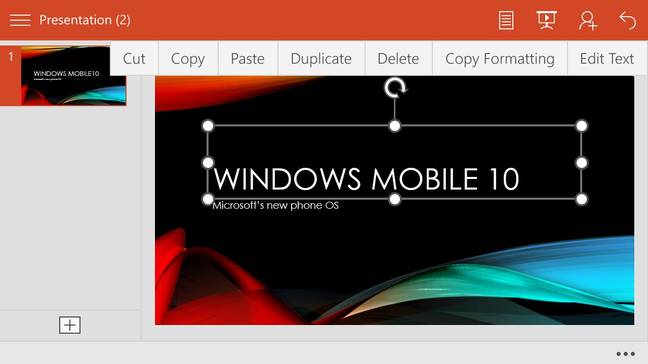 Some features, such as multiple columns in Word, require an Office 365 subscription; and here I ran into problems, since when I tried to add an Office 365 account Word simply quit. PowerPoint and Excel are also feature-rich, though not quite to the same extent as Word.

Outlook is much improved in the most recent version: performance is good, there is a huge range of formatting, insertion and attachment options, and the Word Flow keyboard, which lets you trace quickly between letters to form words, is a great time saver. 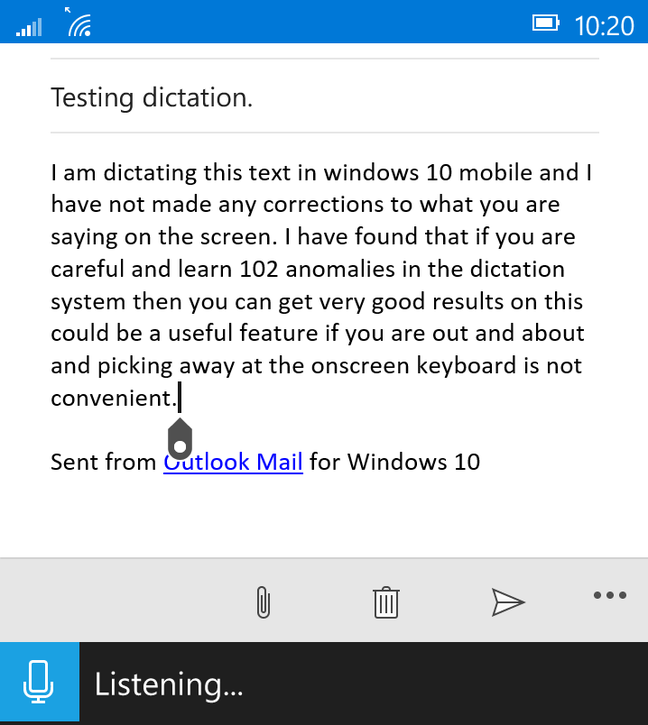 Another intriguing feature is voice input wherever there is text input. Hit the microphone icon and you can dictate instead of typing. Whether this feature is useful or not depends on your tolerance for erroneous input.

Unlike desktop systems such as Nuance Dragon Dictate or Microsoft’s own (inferior) Windows Speech Recognition, there is no voice training, just speak and hope. After a bit of experimentation I was able to get fair results, though in my test email “seeing” became “saying”, “a few” became “102”, "pecking" became "picking" and so on.

I discovered that if you say “full stop” it is interpreted literally, but if you say “period” you generally get a full stop. It is easy to mock speech recognition, until you want to get words into a document quickly, or using a keyboard is impossible because of circumstances or disability. It's a promising feature.

Windows 10 Mobile is now a good-looking mobile OS, and is more coherent than desktop Windows 10 with its struggle to combine legacy and mobile features into something that makes sense for users.

It has lost some of the bold usability of Windows Phone 8.x, but gained more powerful features and even deeper OneDrive integration. The main issues now are frustrating bugs, with apps quitting unexpectedly or cases where you tap a button but nothing happens.

The wider issue is the continuing “app gap”, with most developers ignoring Windows Phone, and the point of interest will be whether Microsoft’s Universal Windows Platform succeeds in attracting more attention.