Page File El Reg bookworm Mark Diston is joined by Vulture Central staffer Matt Dupuy to review the pick of publishing this week. Alex Hourston's debut novel proves to be an intense page turner. Rosemary Sullivan explores the life of the offspring of one of the 20th Century's most fearsome dictators and, on a lighter note, Greg Proops offers his own take on being a clever clogs.

Alex Hourston spent 15 years writing strategy for advertising agencies before returning to university to study literature and In My House is her first novel. It is the story of Margaret Benson, a middle-aged audio typist whom we meet on a walking holiday in Spain.

Upon her return to Gatwick Airport, she is approached by a young girl who is being brought to the UK by human traffickers and asks Margaret for help. Margaret alerts airport security, who arrest the girl's minder.

After a brief period avoiding the tabloid press after a human interest story, Margaret is approached by the girl, Anja who has come from Albania. Margaret and Anja establish a rapport and we begin to learn a little of Margaret's past.

At the outset, Margaret seems to be a self-contained woman, content in her routine and reasonably satisfied with her lot. However, her meeting with Anja exposes her past in ways that she cannot have imagined. Margaret offers Anja the job of cleaning her house, and it soon becomes apparent that both women are drawn to each other by their own loneliness and family problems: "She was never far from my mind. It was almost like love". 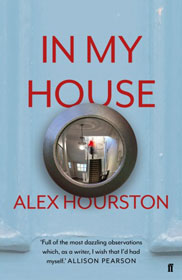 Anja has left her family behind in Albania and it turns out that Goran – her minder, who was arrested at Gatwick – was her boyfriend. Margaret has two estranged daughters whose past is revealed piece by piece as we progress through the text.

I was commending Owen Sheers on his depiction of middle class angst last week and Alex Hourston turns out to have a similar talent. Margaret Benson, who seemed so ordinary and straightforward at the outset of In My House, has more ghosts in her past than seemed possible: "The past was back, pushed up against me... There was something in my bed now, where once there was just space."

It soon becomes apparent that Anja is unlikely to be allowed to stay in the UK, and the two women's relationship sours as they interfere in each other's lives. Margaret tries to influence Anja's asylum case and Anja contacts one of Margaret's daughters. They break off and Margaret’s mood declines: "There is a place I walk when I don't want to be with others. Gloomy, full of dog shit, but it does the job.”

She starts to see Anja through bourgeois tinted lenses, defined by the cleaning products she left behind: "Full of unbranded products. She must have bought them cheap, from God knows where... They were alien and ugly, their plastic thick, opaque and hard to squeeze; their packaging brute and the names on them functional and obvious.”

Maggie's attempt to change Anja's life is destined to fail, yet the younger woman sees behind her façade: "Maggie, you are the loneliest person I ever knew."

The novel ends in a partial reconciliation, all skeletons are decloseted. Alex Hourston has constructed a quality first novel that at first sight appears mundane, yet has hidden depths. It is probably likely to appeal to readers from a fragmented family; the tense stand-offs, the wasted years, pointless feuds and stupid principles will be familiar to anyone whose experience of family life doesn't match up to the prevalent propaganda. Mark Diston

Interview Freedoms eroded, iOS-Android duopoly under fire, chip sources questioned – it's all an opportunity for this phone
Personal Tech2 Jul 2022 | 17