How Music Got Free and Creatocracy

What happens when an entire generation commits the same crime?

Page File Twenty years ago we thought the music industry would disappear and something fairer would take its place, as sure as eggs was eggs. We were right about the first part – but I doubt anyone predicted the new Man would be worse than the old Man.

How did we get a system that's actually less ethical than an industry that was founded on close links to organised crime, payola, dodgy accounting and monumental waste?

How Music Got Free

Today artists who make the music have lousier choices than ever, while new bands make no money from gigging, live profits are pocketed by ancient wrinkles, or by what are called “heritage acts”. Heritage is a word we used to use for Stonehenge, not Jimmy Page or Paul McCartney.

Stephen Witt’s How Music Got Free: What happens when an entire generation commits the same crime? is a rare thing – a compulsively readable look at its collapse, from someone who was a dedicated pirate.

The book is three extended New Yorker-style features interwoven: one on the development of the MP3 format by German psychoacoustic researchers, another on the pirating operation that sprang out of a North Carolina CD plant, and the third on the career of top music executive Doug Morris.

You might think you know some, or most of the story, and yes, some of the characters totally sink to your expectations. Morris really did pocket $10m a year while the industry collapses around him, his contract rewarding him for annual RoI, a figure he set in advance and thanks to his canny nose for a hit, always exceeded. 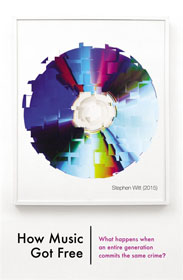 The FBI finds that a crucial (and for years, elusive) pirate kingpin really does live at home – the broadband is in his Mum’s name – and smokes weed all day.

The earnest Germans at the Fraunhofer project – funded (weirdly) by AT&T and Thomson – had a technically superior format which loses out in the politically rigged standards wars, and then rises again, mysteriously appears as the format of choice for the new pirate underground.

Witt invites us to ponder the mystery (nudge nudge, wink wink) and reports that the Germans’ meticulous memory for details deserts them for a year or so, by which time their software has been cracked and has become the standard.

The engineers themselves are themselves no freetards – they want patent licensing revenue – and try to help the trade group RIAA. Which isn’t interested; the RIAA’s audiophile snobs aren’t interested in promoting lossy audio, Witt writes).

Familiar stuff. We all know that for years the music industry didn’t believe in electronic distribution, then tried to do, and did it so badly it was upended by a boutique computer company. Witt is amazed that so much leakage came from inside the music industry’s physical supply chain, and it took so long to track down the bootleggers.

By the time it did, they’d made the “transition to digital” that had eluded the industry. It’s just as astonishing that when the leakers were finally busted, nobody got a fine. Whereas around 17,000 civilians did, before the RIAA halted its “educational” program of suing file sharers.

Next page: Whistle for it
Page: