Flushed with success: No bog standard Canadian goldfish these 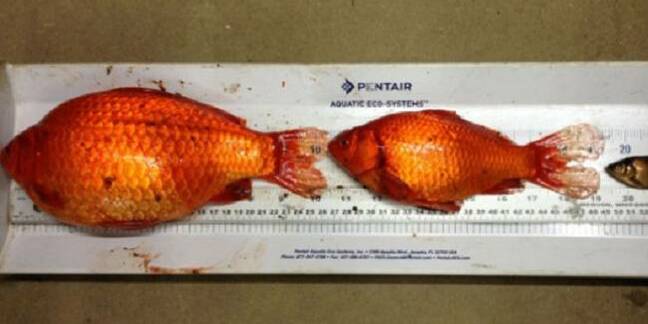 Goldfish popped doon Canadian toilets have been found to be not only surviving, but positively thriving in their new underworld, so much so that Alberta's government has launched a campaign to prevent people flushing away their aquarium-dwellers.

Some of the blinged up critters have grown to the size of dinner plates, and are multiplying like bunnies from Lethbridge to Fort McMurray, the provincial government claims.

Kate Wilson, an aquatic invasive species coordinator at Alberta Environment and Parks, said: "It's quite surprise how large we're finding them and the sheer number," CBCnews reports.

Regarding one case in which 40 of the domestic fish species were pulled from a stormwater pond in the municipality of Wood Buffalo, Wilson admitted it was "really scary because it means they're reproducing in the wild, they are getting quite large, and surviving winters that far north."

"Approximately one third of the invasive species out there that threaten native aquatic environments are from aquariums and the ornamental trade," she said.

Alberta is insistent on preventing non-native species from becoming part of the region's ecology. The region currently declares itself "rat-free", and maintains a rat hotline for any residents who believe themselves to have sighted one of the furry fellows.

Goldfish (Carassius auratus) have been known to grow to up to 19 inches long, and in the wild are omnivorous predators, gobbling crustaceans, insects, and various plant matter as they swim.

Contrary to urban myth, they have a memory-span of at least three months and can be trained to recognize and to react to colour signals, and perform tricks. ®

Animals can sue, but don't have the ability to file intellectual property lawsuits