Comment Fresh from a big product and business model launch, Pure Storage was undestandably reticent about future technologies at a briefing in Mountain View. However, interesting tidbits did drop from speakers' lips.

Co-founder John "Coz" Colgrove said: "Our goal is to make all disk storage extinct."

Dressed in his signature long t-shirt, gym shorts and white trainers – this guy is not a "suit" – Colgrove talked more about this. Flash would get cheaper. He also thought the ongoing and traditional increase in disk density would slow down, because fewer drives would be sold under the onslaught of flash. This would result in fewer drives bearing the cost of the research and development and manufacturing needed to make them, thus dampening down the $/GB fall rate we have all been enjoying.

Colgrove thinks that with, for example, future 50TB and 100TB disk drives, the number of applications wanting to use them would be limited, again restricting their use, hence their sales, and tending to put upwards pressure on their $/GB. 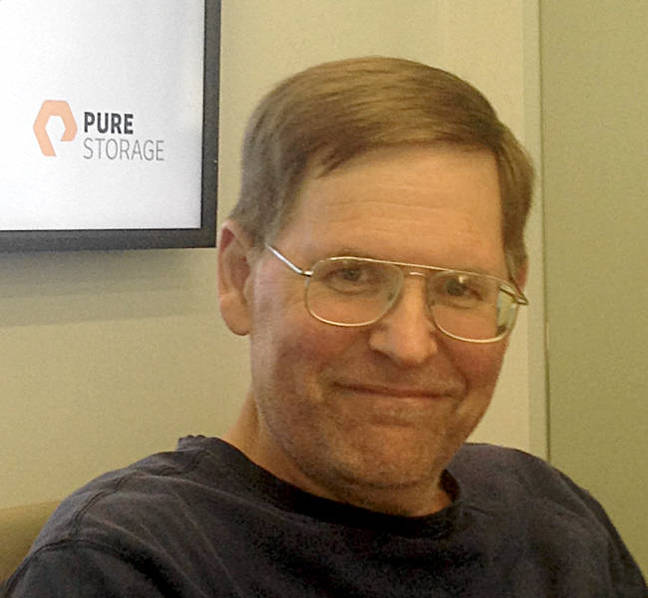 We asked him how disk will become extinct?

"You have to get flash to the same cost as disk – or to so close it makes no difference... It happens stage by stage."

He did mention technologies such as 4-bits-per-cell, quad-level flash (QLC) and even said 6-bit HLC had been experimented with. Presumably its endurance would be much worse than the poor – by MLC standards – levels offered by TLC.

Colgrove said he could conceive of flash arrays using tiers of flash, from fast and expensive through to slower and less expensive. Data would be placed according to its value and access speed requirements.

He also said Pure was not looking to place its networked flash arrays closer to compute by, for example, adding CPUs to arrays to run application compute tasks. Nor was he keen on software-only versions of Pure's products, as that would increase the risk of mismatched hardware and software affecting the user experience.

Before leaving the room to go to an orientation session with new hires – a constant task with Pure's recruitment rate – he said Pure wanted to keep on shipping more density: "Next year I want 8X."

El Reg thinks that means 3D TLC NAND is in his sights. He's a man on a mission: a disk-extinction mission. It'll take years, but he wants the last enterprise disk drive to spin down and die. Solid state rules, okay John! ®