Microsoft has released Sway for Apple's iPad and iPhone, and will follow up with an app for Windows 10 "later this summer".

Sway is part of the Office family and lets users create presentations that format themselves using elements, known as cards, containing text, images, video and charts. These use embedded content from websites such as Twitter, Google or Bing maps, Office documents on OneDrive, or audio from SoundCloud. Presentations are entirely web-based and published by sharing the link.

The strength (and weakness) of Sway is that once you add the cards in the order you want, all the design is automated. You provide the content, and Sway’s algorithms determine how it is presented, subject to a few general choices such as colour palette, font and “animation emphasis”.

The latter controls the extent to which your images roll around the screen. You can also choose between horizontal or vertical scrolling, with further options promised in future. A Remix button lets you choose a new design at random.

The new Sway app is available now, but is not the equal of the web design tool, judging from my quick hands-on. Various cards are missing, including Slide Show, Grid, Comparison and Chart. You cannot embed content in the same way, and when selecting an image, the app shows only what is available on your iPad rather than letting you search sources such as Flickr and Bing.

I also hit an annoyance where I started a Sway on the iPad, closed the app, and then went to the web to continue working on it, to find that it was read-only.

These things can be improved but there remains some uncertainty about what need Sway is addressing. It makes best sense as a kind of content aggregation tool, where the web version is able to bring together content from around the web, while the app version is intended for gathering content which you discover or create using the mobile device on which it is running. You could use it for a field trip, for example, adding photos and video which you capture while out and about, then adding text to complete the report. On the iPhone the app supports dictation, for quick voice input.

That said, there are already numerous note-taking apps on iOS, including Microsoft’s own OneNote. Although that does not create instead presentations, it does a good job of capturing miscellaneous content, including web links, into a document that syncs over the internet. 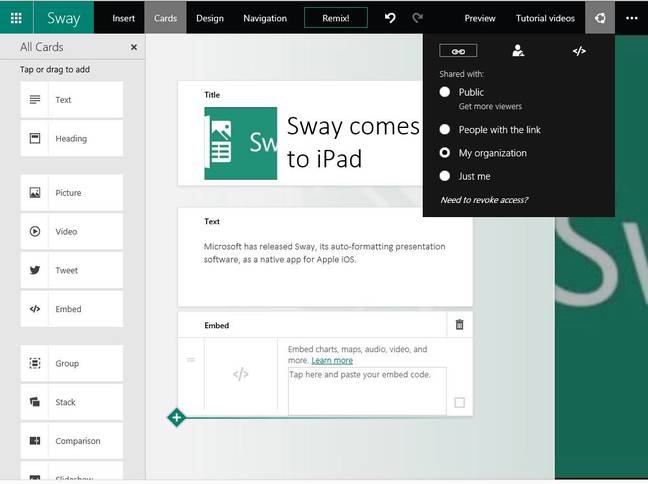 Microsoft is also bringing Sway to Office 365, its cloud-based email and collaboration suite. This is still in preview, though selected customers have access. The Office 365 option lets you sign in with Azure Active Directory (which can be linked to an on-premises Active Directory) and share a Sway with others in your organization, though currently this is not fine-grained: you can either share with your entire business, or restrict it to “people with the link”, with no control over how that link is passed around.

The Sway team has big plans for the product, according to General Manager Chris Pratley, who said on the Yammer discussion group that it has “a vast and marvellous backlog – a thing of beauty that spans years.”

This contrasts with the rather limited app currently on offer, so enthusiasts will be hoping that it does not take years to improve it. ®