Q: What's black and white and read all over? A: E-reader displays

Evolving e-books and the holy grail of colour e-paper

You'll often see the terms e-paper and e-ink used almost interchangeably. But – here comes the science bit – the latter is really a subset of the former. E-paper is a whole category of technologies, broadly describing displays that work like paper, in that they reflect light, so don't need a light source. They also need minimal amounts of power to maintain a display.

In the case of E Ink (actually a company name – the technology is called electrophoresis), there's no power needed to maintain the display at all. That's why it's been so popular in dedicated readers like the Glo HD. Effectively, the whole system can sleep between page turns, allowing for battery life to be measured in weeks, rather than hours.

For those who aren't familiar with how it works, E Ink relies on tiny capsules containing both a clear liquid and black and white ink particles, which are electrically charged. The black pigment carries a negative charge, and the white a positive one. A transparent matrix of electrodes above and below the capsules is manipulated to draw one or the other pigments to the surface.

The end result is the familiar sort of screen seen on a Kindle or Kobo reader, with almost black-on-white text and up to sixteen shades of grey, which is created by sub-addressing individual pixels. While it's generally great for reading, the downside is that updates aren't very fast, and sometimes result in a brief flash as the whole screen goes black before the new image appears.

That flash is something that E Ink's latest displays avoid as much as they can, by shaping the waveforms that are applied to the individual cells. That, apparently, gives more control over acceleration and deceleration of the charged ink particles. And, in turn, ensures that a full page refresh can be done far less often. The company claims the technology – called Regal – can reduce it to as little as every 100 pages. 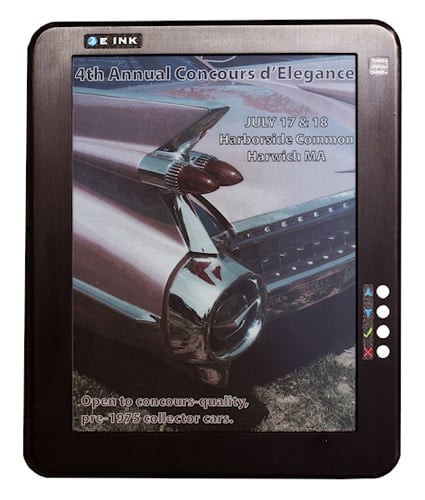 E Ink can do colour – the Triton display uses overlaid filters for red, green and blue

It's probably no surprise to learn that the E Ink Corporation had its roots in MIT's media lab. It's subsequently gobbled up one of its chief competitors, SiPix, and is the main vendor of electronic paper displays, including some that are flexible. They are not, however, the only game in town. For example, the Cybook Ocean uses a very similar screen called O-Paper. The subtle difference from E Ink is that the white particles are charged and the black ones neutral.

It may be the most widely used technique for creating e-paper, but electrophoresis isn't the only one. If you've been following e-paper technology for a while, you've almost certainly heard of Mirasol, a technology from Qualcomm. It was long-awaited back in 2011, when some Korean e-readers were launched, and most of the world's still waiting. So far, the most high-profile product to sport a Mirasol display has been the 2013 Toq smartwatch. 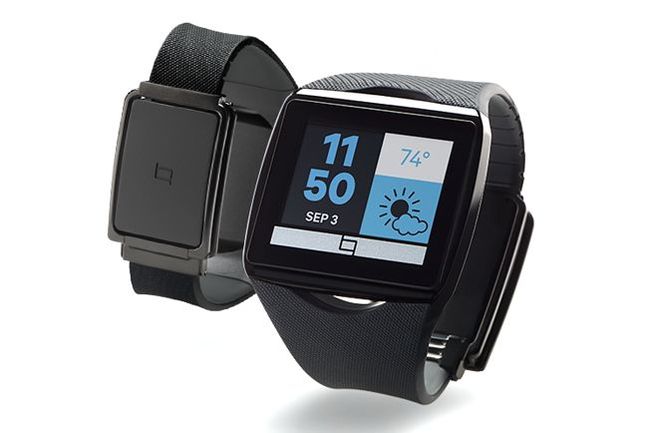 Besides a couple of Korean tablets, the most notable Mirasol product to date is the Toq

It's safe to say that, despite the “paradigm-busting, always-on use case”, the Toq has been somewhat overshadowed by other products. Most of the smartwatches you can buy now use more conventional display technology, even if it does mean you'll have to charge more or less every day. The chief exception to that is the Pebble watches, which use e-paper displays based on a "memory LCD" which looks very similar to E Ink.

As for Mirasol itself, it's based on the principle of interferometric modulation. Rather than using pigments and liquids, it relies upon Micro-Electro-Mechanical Systems (MEMS). These are, essentially, small moving plates that will either appear black – not reflecting light – or reflect red, green or blue, depending on their position.

The size of the gap between the elements determines the wavelength of light that will be reflected. Each of the modules is referred to as an IMOD, and a collection of red, green and blue IMODs is put together to make up a pixel.

Without the need to blank the screen and with faster refresh rates than pigment-based displays, Mirasol certainly looks interesting, but it's been "coming soon" for a very long time now. And with the display technology being based on specific distances between layers to control the reflection of light, it may be harder to adapt for flexible displays than other types of e-paper.