Look, ma, no repeaters – but we can still decipher the info. Huzzah!

A group of university researchers claim to have developed a method to increase the data bandwidth of fiber optic cables by eliminating a barrier that has limited the maximum power at which optical signals can be sent.

The team from University of California, San Diego said its method of adjusting the frequency of light signals would allow fiber lines to carry data over long distances without the need for electronic repeaters.

"Today's fiber optic systems are a little like quicksand. With quicksand, the more you struggle, the faster you sink," said researcher Nikola Alic in a statement.

"With fiber optics, after a certain point, the more power you add to the signal, the more distortion you get, in effect preventing a longer reach. Our approach removes this power limit, which in turn extends how far signals can travel in optical fiber without needing a repeater."

Because they must process as many as 200 channels of signals at massively high data rates, they are essentially supercomputers, making them costly and difficult to construct.

The UCSD group's paper, published in the June 26 issue of the journal Science, found that by running light pulses through a frequency comb, data could be sent and received over long distances without significant signal distortion. 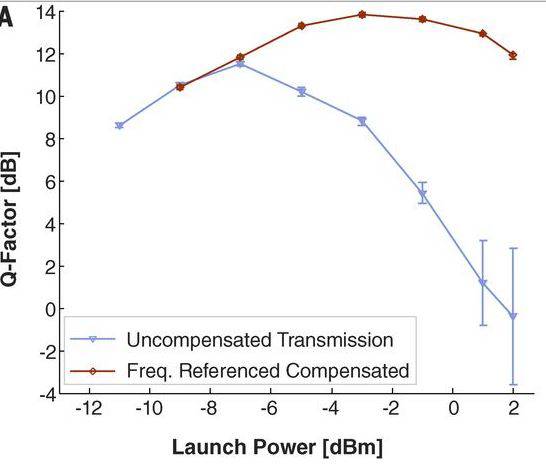 The boffins, during their experiments, were able to send an optical signal along 12,000 km (7,456 miles) of optical cable and successfully decipher the information at the other end, setting a new record.

They did it by using the frequency comb to synchronize the frequencies of the various channels of optical information traveling across a given fiber. Ordinarily, such signals are subject to crosstalk caused by a physical phenomenon known as the Kerr effect. The longer the fiber and the higher the power level, the greater the crosstalk.

But by manipulating the signals to take into account the known physical properties of the Kerr effect before the data was even transmitted, the researchers were able to render the crosstalk reversible at the receiving end.

"We are pre-empting the distortion effects that will happen in the optical fiber," said research scientist Bill Kuo, who was responsible for developing the wide-band frequency comb used in the experiments.

The group's method could provide telcos with a way to boost their optical signals – and thus their data transmission rates – without the labor and expense of installing repeaters along their lines.

The seven-person team behind the study included five researchers from the UCSD Department of Electrical and Computer Engineering and two researchers from the Qualcomm Institute, a division of the California Institute for Telecommunications and Information Technology that's named after the San Diego-based chipmaker (thanks to hefty donations) but operated jointly by UCSD and the University of California, Irvine. ®

It's free. Now find something it can actually be useful for

Who, Me? Giving students network messaging in the '90s. What could possibly go wrong? MY EYES!