HP one of the fairest, claims Gartner's magic quadrant on the wall

Dell, HDS non-inclusion could be seen as a distortion

Gartner has announced that HP has joined the leaders in its all-flash array magic quadrant, while Violin Memory, Nimbus Data and Cisco have been demoted, and Dell and HDS are excluded altogether from the MQ because of the research giant's peculiar classification criteria.

The MQ classifies suppliers in what Gartner calls the Solid State Array (SSA) market, but which everyone else calls all-flash arrays (AFA).

Only arrays which have a unique model and ordering number — and which cannot have disk drives added — are included in the Gartner mix, which means Dell and HDS AFAs are excluded.

While such players remain excluded, the MQ presents a distorted picture of the AFA Market's players.

Pure continues to be the main startup and is in joint first place with EMC in MQ terms, possibly first place.

Solidfire and Kaminario have both moved closer to the Visionary/Leader quadrant boundary and could break through into the Leader’s quadrant. 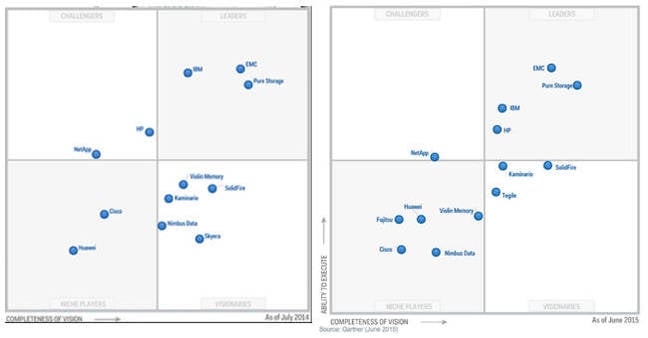 Fujitsu introduced its DX200F in March, and Gartner says of this: “Fujitsu's short-term tactics are to resell the Violin Memory SSA when customers require larger capacity SSAs, and the DX200F when smaller capacities are required. This will continue until Fujitsu has its own larger capacity offerings and data reduction ability.”

Other snapshots from the MQ include:

This is an extraordinarily instructive quick look at the AFA market and it is a shame that both Dell and HDS are excluded as they are both, we understand, selling lots of all-flash array equipment and would, we estimate, appear in either the Challenger’s or Leader’s quadrants and probably the latter.

Until they do appear this AFA, MQ's picture of the market's players is a distorted mirror view.

Get a copy of Gartner’s latest AFA MQ from Pure's website here. ®