Windows 10 is due in one month: Will it be ready?

Analysis The release of Windows 10 is set for 29 July, just one month from now. It will be a significant moment, marking the first Windows 10 release in a wave that will eventually include Windows Mobile and Xbox, and is critically important to Microsoft following the poor reception for Windows 8.

This time, Microsoft is not following the pattern of previous Windows releases. Windows 10 marks the beginning of "Windows as a Service," as explained by VP Terry Myerson back in January:

Once a Windows device is upgraded to Windows 10, we will continue to keep it current for the supported lifetime of the device – at no cost. With Windows 10, the experience will evolve and get even better over time.

We'll deliver new features when they're ready, not waiting for the next major release. We think of Windows as a Service – in fact, one could reasonably think of Windows in the next couple of years as one of the largest Internet services on the planet.

Businesses will be offered a more predictable release cycle based on the idea of a "Long Term Servicing Branch" and a "Current Branch for Business," but consumers will get updates as soon as Microsoft thinks they are ready, based on feedback from the continuing Windows Insider preview programme.

In fact, customers are explicitly a kind of testbed for business releases, according to this post:

"By putting devices on the Current branch for Business, enterprises will be able to receive feature updates after their quality and application compatibility has been assessed in the consumer market." 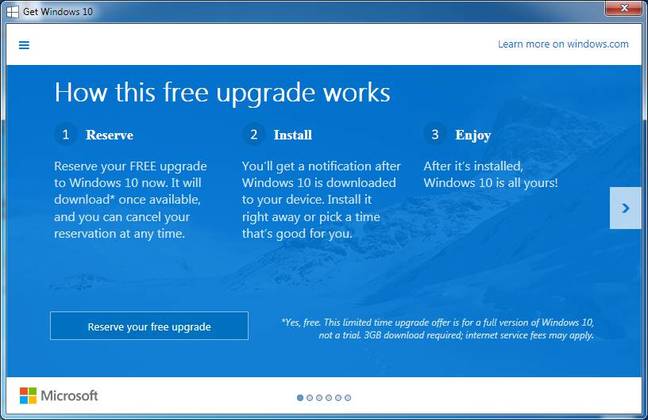 The 'Get Windows 10' upgrade offer

The first of these assessments by unwitting consumers will begin on 29 July, when millions of users running Windows 7 and 8.1 will receive a downloaded upgrade to Windows 10, having reserved it through the "Get Windows 10" advertisement that was delivered via Windows Update earlier this month.

That is the question, and it has two aspects. The first is whether the new user interface will catch on with users, or whether they will still prefer the familiarity of Windows 7. The second is whether their upgraded PCs will still work properly.

Traditional wisdom in the PC community says two things. One is to wait for the first Service Pack before upgrading to a new version of Windows, and the other is to avoid in-place upgrades in favour of clean installations. The "Get Windows 10" initiative defies both of these guidelines.

Another cause for concern is that the quality of the preview builds has not been reassuring. Issues are partly hardware dependent, but common ones include apps not running when tiles are clicked (or tapped), or the Start menu not appearing when the Windows key is pressed or Start button clicked. Even if only a small proportion of those upgrading next month encounter this kind of issue, the numbers are large enough for those affected to make a lot of noise.

On the desktop side, Windows 10 previews seem fairly solid, and compatibility with existing desktop apps is good. Most of the issues are with the new app platform, officially called the Universal Windows Platform (UWP), based on the Metro personality from Windows 8. While you can mostly ignore Metro in Windows 8.x if you prefer, this is not possible in Windows 10, where the Start menu and many accessories are built on the UWP.

The Edge browser is another new addition that may cause issues. Edge is a big advance over Internet Explorer 11, free from compatibility baggage that slows down the older browser, and with improved support for HTML5 standards. Unfortunately there are yet sites that do not work correctly with Edge, where changing to IE (or an alternative browser) fixes the issue. Users that want everything to "just work" will be frustrated.

With previous Windows releases, there has normally been an interval during which the RTM (Release to Manufacture) build is made available to developers for testing, but not yet generally released. It looks as if this will not be the case with Windows 10, or that the RTM period will be short, which won't give independent software vendors time to test and fix issues before mainstream users get their hands on the release.

Questioned on this matter of Windows 10 readiness, Microsoft executive Joe Belfiore said in April that the core OS was just about done, the shell 85 per cent done, and apps only 65 per cent done.

He also noted that preview builds were "in a rough spot" because Microsoft is still merging work from various teams, implying that it can all come together at the last moment. Recent builds of Windows 10 Mobile have improved dramatically, but until a final or near-final Windows 10 PC build is in our hands, we will not know the extent to which the same may happen there.

Mark your diaries: the July date will be a notable day for Microsoft and for Windows. ®