Rosetta spots potholes IN SPAAACE: Someone call the galactic council

Comet 67P is collapsing from within

The Rosetta probe, currently in orbit around Comet 67P/Churyumov-Gerasimenko, has spotted what appear to be massive sinkholes on the comet's surface that are thought to be caused by the cosmic snowball melting in the Sun's rays. 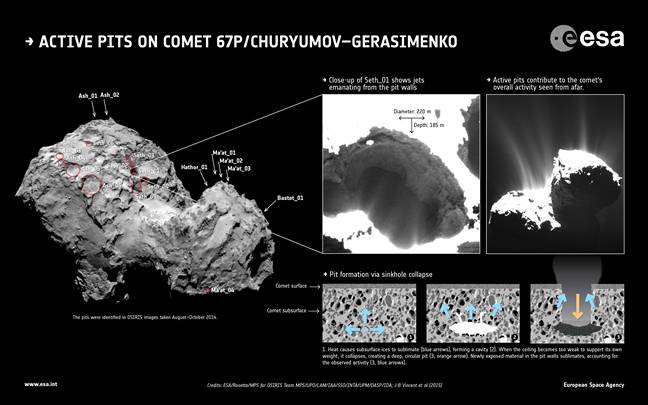 The comet's holier than Pope Francis (click to enlarge)

The holes, some of which are hundreds of meters across, were initially thought to be the result of explosive outgassing from the heating comet; Rosetta spotted just such an eruption as it closed in during April. But the new images blow that theory out of the water.

"The amount of material from the outburst was large – about 100,000 kilograms – but this is small compared to the size of the comet and could only explain a hole a couple of meters in diameter," said Dennis Bodewits, an assistant research scientist in astronomy at the University of Maryland.

Instead, the boffins are working on the theory that the holes are caused by the ice under the comet's surface evaporating into space. When enough material bleeds off, the surface falls in and creates a sinkhole, simultaneously causing a plume of debris to float off into space. 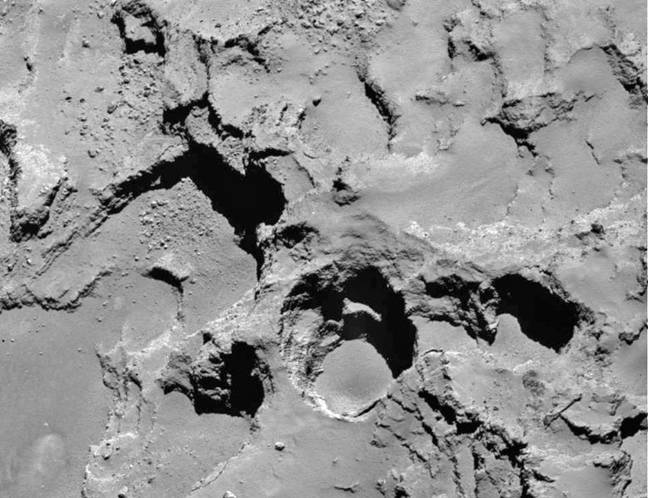 The most active sinkhole on the surface, dubbed Seth-1

"It seems that outbursts aren't driving the process, but instead are one of the consequences," Bodewits explained.

The research, published in the latest issue of the journal Nature, notes two types of sinkholes. Some are fresh and clean of dust and emit streams of gas, while others – presumed to be older sinkholes from the comet's last trip around the Sun – are partially filled with dust and gravel.

The comet will make its closest approach to the Sun on August 13 and Rosetta will be focusing its cameras on sinkholes up to and beyond that date, both to find out more about how the holes are created and to use them to divine what lies underneath the comet's surface.

Over eons the comet will eventually boil away to dust as it makes endless circuits around the Sun, but chances are mankind will be long gone before that happens. ®