What makes the Vulcan so distinctive is the Delta wing that at the time was a big departure from standard bomber design. It was truly the best of British. The project technical director, Roy Chadwick, never got to see the iconic creation he helped build take to the sky. He died in a plane crash in 1947. Further misfortune struck when, on the final leg of a worldwide tour to showcase this triumph of UK engineering, a Vulcan crashed and was damaged beyond repair at London Heathrow. In the end the Vulcan finally entered RAF service in 1956.

The closest the V-force came to nuclear war was at the time of the Cuban Missile Crisis of 1962. According to legend these huge planes sat at their dispersal bases throughout Europe at the end of the runway, engines running, nuclear armed. Part of the design spec was that these aircraft should be able to be off the runway within two minutes when in such an alert-ready state, so as to make it into the air ahead of any inbound Soviet ballistic-missile strike. 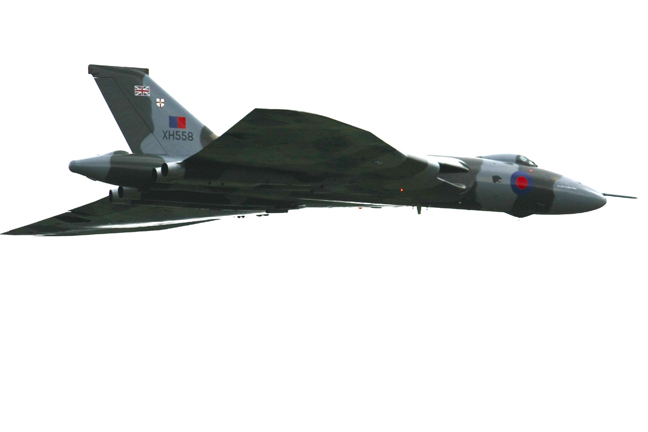 Everything about the Vulcan was aerodynamic

The irony is that the Blue Danube was being superseded by a new nuclear weapon, Red Beard, that very same year. This was much smaller and more technically advanced - perhaps due in part to the fact that the USA had amended the McMahon Act to allow British access to American nuclear knowledge in 1958. And weaponry was rapidly moving on further still. There were plans to introduce a new long-ranging wing mounted nuclear missile that the US had on the drawing board, called Skybolt - though this might have come in for the same criticism as Polaris and later Trident did, on the grounds that it would have required US technical support.

Skybolt was seen as necessary, as Soviet air defences had now become strong enough to cast serious doubt on the ability of the V-force to successfully deliver free-falling nuclear bombs to their targets. Britain's own air-launched missiles were not seen as being up to the job. The Blue Steel missile went into service with the V-force in 1963, but it was never regarded as very credible - it apparently required up to seven hours of pre-launch preparation, it was highly unreliable, and its lack of reach meant that the V-bombers would probably have been shot down before they could get Blue Steel within range of its targets.

But the Skybolt was cancelled by the US, much to the discomfiture of the RAF. The project had had a troubled history with many failed tests: but the fact is that by this time, air-launched nukes had been effectively rendered obsolete by submarine-launched ICBMs. A nuclear-powered, nuclear-armed submarine at sea was well-nigh impossible to locate, and thus it could not be knocked out by a surprise attack as a base full of V-bombers or landbased missiles might: a sub could remain on patrol poised to strike for months on end, rather than only hours like an aircraft. Missile submarines on both sides gradually eased the terrifying hair-trigger confrontation scenario of the early Cold War (as in the case of the Cuban Missile Crisis) in which opposing premiers had only minutes to react to a warning of enemy attack before their own nukes would be wiped out.

So the V-force never received weapons which could have restored it to credibility. It had in fact provided a credible nuclear striking force for just four years, from the Vulcan's arrival in 1956 until Soviet air defences became too tough for it to penetrate around 1960 (that was the date estimated by the Ministry of Supply when it ordered Blue Steel, anyway). Had the Cuban Missile Crisis escalated into a hot war in 1962 - had the V-force alert planes made their two-minute takeoff runs, headed into the heart of the Soviet defences at high altitude, armed with their freefall bombs - the chances are that very few would have survived to reach their targets.

Following the row between the US and Britain after the Skybolt cancellation - the "Skybolt crisis" - it was agreed that the Royal Navy would get the Americans' Polaris ICBMs instead. When the first Royal Navy Polaris submarine put to sea on deterrent patrol in 1968, just 12 years after the first Vulcans had gone operational, the V-force's raison d'être was completely gone - the more so as improved nuclear bombs could now be carried by much smaller and more tactically survivable jets, and were. The useless Blue Steel was retired in 1970.

The RAF, however - having been created specifically for the manned strategic bombing mission - naturally had much love for the V bombers and the Vulcan remained in service through the rest of the 1960s, then all through the 1970s, and then past all sense or reason on into the early 1980s. On the eve of its long-delayed departure from service, the mighty plane finally saw real operational service in the Falklands War of 1982. Rather than nuclear warheads, the Vulcan's swan song saw it armed with conventional weapons for the highly controversial "Black Buck" raids into the South Atlantic.

As the British Task Force - a mainly Royal Navy and Royal Marines formation, with significant Army involvement - moved south to retake the Falklands, it was clear that the RAF risked being left out almost entirely. This was all the more embarrassing as it was the RAF's fault that the British fleet did not have proper fighter cover - the airmen had successfully managed to ensure that Britain did not replace its big fleet carriers and catapult jets when they were decommissioned in he 1970s, arguing that the RAF could provide air cover to the British fleet wherever it might go to war.

This turned out to be wrong, but luckily the Royal Navy did have its own Sea Harrier jump-jet fighters aboard its pocket-sized "through deck cruisers" and the ancient carrier Hermes: but it had no airborne radar aircraft to direct the Harriers, so that the British fighter pilots could only intercept Argentine air attacks by being luckily in the right place at the right time. They managed this surprisingly often, but even so a lot of British ships were hit and a lot of soldiers and sailors died.