Black Buck didn't have much luck

As the Task Force battled for its life in the South Atlantic, the RAF was keen to show it could do something. The problem was that the UK had nothing ready to deliver a large payload of bombs almost seven thousand miles away as a return journey. The range was just too far. 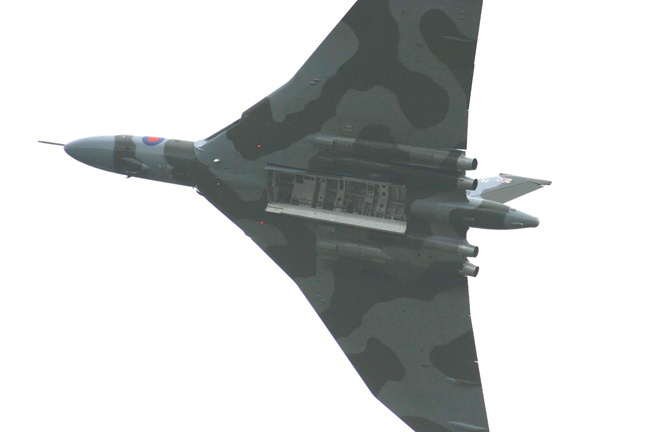 Only weeks before, the Vulcans had been ready to stand down and were to be scrapped by the government. They were quickly brought out of mothballs and the mechanics searched everywhere for spare parts to keep the old girls running. Getting the previously disabled in-flight refuelling system working was one of the biggest challenges. No one had even practiced mid-air refuelling of a Vulcan for many years.

Black Buck was very complex with tankers refuelling tankers that fuelled the Vulcans. To get a Vulcan to the Falklands and back to Ascension took 11 tankers' worth of fuel. On each mission, two Vulcans set out - one primary and one backup - with the necessary swarms of tankers lifting off as required to support them and each other so that there was a good chance of one bomber remaining serviceable and making the final run in to the Falklands.

Based on Ascension Island, the volcanic rock just south of the equator half way between Britain and the Falklands, the craft were flown on a 7,000 mile, nearly 16-hour round trip. The missions combined in-flight refuelling and low-level approach at 300 feet to help avoid detection by the enemy's forces before the lone bomber on each raid climbed to 10,000 feet for the final 40 miles to achieve bombing height. The unguided bombs travelled three miles horizontally and nearly two miles down through the air after being released. The crews never saw their target: the bombs were dropped on automatic, using the same navigation radar which had been employed by Lancaster bombers during World War II.

Of seven planned Black Buck raids, each designed to put a single Vulcan into the skies above the Falklands, five were actually flown to completion. Each one was an epic aerial odyssey, with the bomber and tanker crews performing heroic feats of skill and endurance. However it is difficult to believe that any serious military effects resulted: just one bomb of all the scores dropped actually struck its target - the runway at Port Stanley. Nothing else of any significance to the campaign was hit on any of the Black Buck missions, with bombs (and homing anti-radar missiles on two missions) mostly blowing up empty grass, though some damage and a few Argentinian casualties are believed to have resulted. (There is some confusion as the airfield was also bombed by Sea Harriers as well as being shelled and missiled by British warships.) The one lonely runway hit achieved little: the Argentinians continued using the Stanley runway to operate aircraft until the fighting ended.

The RAF still likes to claim that without the Black Buck missions, Argentina might have based more powerful planes on the Falklands, but this is a difficult case to make. Most independent analysis suggests that the raids achieved little of significance.

Nobody, however, suggests that the Black Buck missions were not magnificent feats of airmanship.

That was the close of the Vulcan's story with the RAF. And yet there was much affection for the old V-bombers, despite the fact that they had only provided a credible deterrent for a few years and had otherwise been undistinguished. This affection was nurtured by the RAF, which continued to have a taxpayer-funded Vulcan display unit until 1992 - ten years after the Vulcan retired as a fighting aircraft, almost a quarter-century after Polaris had rendered the V-force obsolete, and 32 years after the V-force had ceased to be credible in its primary mission. Even after this the Vulcan To The Sky Trust came into being, and the old RAF display plane XH558 returned to the skies once more in 2007.

Now, however, the grand old warhorse of the skies is finally retiring for good. A group of companies that provided support and skills to keep XH558 going made the decision that they could no longer afford the costs associated with keeping the Vulcan in the air, especially as most of the parts no longer existed and airframe hours were becoming a major concern.

XH558 is not off to the scrap yard however, but to her new home at the Vulcan Aviation Academy where the next generation of engineers can learn their craft.

Until then, you can see, hear and feel XH558 in action on its UK farewell tour. ®