'Didn't make any such plea anyway, what everr', tweets Wikileaks 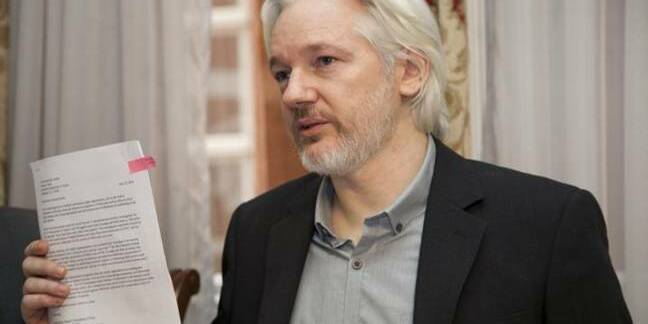 You should see the un-edited letter!

The 2500-word missive, also published on the Justice4Assange website, gives chapter and verse regarding the blonde one’s travails. The former computer hacker has been lurking in the Ecuadorian Embassy in London since August 2012, but the letter begins much earlier: “My name is Julian Paul Assange. I was born on July 3, 1971 in Townsville, Australia …”

The rambling letter details how Assange has been persecuted by the US authorities for his role in exposing corruption. No arrest or extradition warrant has actually been issued for him in the US, but he is wanted for questioning in Sweden in relation to alleged sexual assaults.

“They have not shut me up,” he adds - anyone who reads the full letter will certainly not dispute that claim.

The letter states that Assange was contacted by the French Justice Minister, Christiane Taubira, with an offer of asylum.

“By welcoming me, France would make a humanitarian and symbolic gesture, sending encouragement to all journalists and whistleblowers who risk their lives every day to allow citizens to take a step closer to the truth,” continues the epic novel letter.

It then makes a startling claim that Assange's unknown youngest son is half-French and he has not seen him or his mother for five years: “I had to keep their existence secret until today in order to protect them.”

France was unmoved by the heart wrenching story claims. In an official statement the government said it has received Assange’s letter, but following a detailed assessment of the legal elements and Assange’s material situation, “France is unable to act on his request.”

“Mr Assange’s situation presents no immediate danger. Furthermore, a European Arrest Warrant has been issued for his arrest ...” says the statement.

The WikiLeaks Twitter account tweeted on Friday afternoon to say that no asylum request has been made by Assange. ®

WikiLeaks is wiki-leaked. And it's still not even a proper wiki anyway

Claims Trump's voter-targeting firm got in touch before election

Sketch Believe nobody except Aleksandr Kogan!