Boffin: Will I soon be able to CLONE a WOOLLY MAMMOTH? YES. Should I? Hell NO

But it would be useful for research 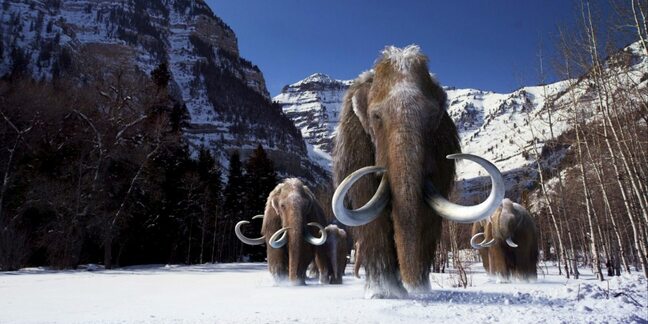 Poll It will definitely be possible within the foreseeable future to bring back the long-extinct woolly mammoth, a top geneticist has said. However, in his regretful opinion such a resurrection should not be carried out.

The assertion comes in the wake of a new study of mammoth genetics as compared to their cousins the Asian and African elephants, which live in warm habitats very different from the icy northern realms of the woolly giant.

The research offers boffins many revelations as to the differences which let the elephants and mammoths survive in such different conditions.

“They are an excellent model to understand how morphological evolution works, because mammoths are so closely related to living elephants, which have none of the traits they had," he added.

Apparently the mammoths may have been led to become fatter and hairier than the elephants by a particular gene called TRPV3. We're told:

When transplanted into human cells in the laboratory, the mammoth TRPV3 gene produced a protein that is less responsive to heat than an ancestral elephant version of the gene.

This result is supported by observations in mice that have TRPV3 artificially silenced. These mice prefer colder environments than normal mice and have wavier hair.

But Lynch said that this relatively low-key method of potentially creating a terrifying woolly human-mammoth abomination in the lab can't reveal the whole truth.

“We can’t know with absolute certainty the effects of these genes unless someone resurrects a complete woolly mammoth," he added.

“I personally think 'no'. Mammoths are extinct and the environment in which they lived has changed. There are many animals on the edge of extinction that we should be helping instead.”

The mammoths died out around 10,000 years ago, recently enough that pictures of them painted by primitive humans survive to this day.

The genetic study, entitled Elephantid Genomes Reveal the Molecular Bases of Woolly Mammoth Adaptations to the Arctic, has been published here, in the journal Cell Reports. ®

Thanks for your feedback!

No spoilers Let me tell you about my mother

Interview When physics gurus speak, they speak to El Reg

Remember that clinical trial, promoted by President Trump, of a possible COVID-19 cure? So, so, so many questions...

What happens in Vegas ... will probably go through the huge bit barn Google is building in Nevada

Excuse us, we mean 'Jasmine Development'

Just a friendly reminder there were no at-the-time classified secrets on Clinton's email server. Yes, the one everyone lost their minds over

But, but her emails!