The ecosystems aren't the only differences between these two devices, of course. There's the software that they each run, and there are some other smaller points, too, which may be important to some users. Incidentally, if you've laboured over unresponsive ereader touchscreen keyboards of old, you'll find that, thankfully, both the Kobo and Kindle make swift work of typing.

Cases available for both devices

Some people, although I'm not one of them, find the occasional full black flash refresh of e-ink screens distracting. The latest generations of screen don't have to do that as often, and both these readers give you some control over it. On the Kobo, you can set the refresh to occur after between one and six page transitions.

The Kindle has a simple on/off setting. Turned on, you get the black flash for every page. Turn it off, and you'll notice page updates seem a little more organic than on the Kobo, as if the letters are dissolving from one to another. This is the Regal waveform technology from e-Ink at work, which allows the Kindle to maintain a crisp display with far fewer refreshes. It's configured to do one either every sixty pages or at the start of each new chapter, whichever comes first.

The other differences are really down to the software. The settings screens on the Kindle are bolder and less minimalist than those of the Kobo. That's largely a matter of preference, but there are more substantial elements to the comparison, especially in terms of usability.

For instance, on the Kobo, you can tap anywhere in the middle of the screen to bring up the menus. On the Kindle, you have to tap at the top and when you do the various bits of on-screen furniture take up about twice as much space as on the Kobo. It's almost as if they've not been tweaked correctly for the higher dpi screen. 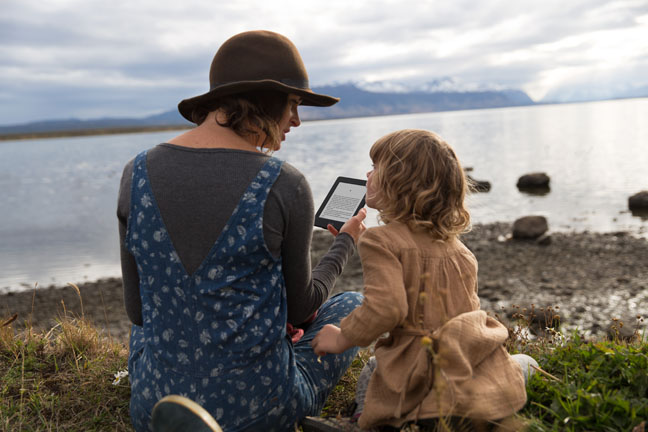 At least when the light fades you can carry on reading

Worse, having tapped the top of the screen to bring up the menus, if you want to scroll quickly through you have to then tap at the bottom for that option. The more compact menus on the Kobo manage to provide quick access without as much finger movement.

It's also possible to customise the areas on the Kobo screen that are used for menus, page forward and page backward, for example vertically split into thirds, or with a smaller area for the menu and a large area for page turning.

The Kindle has a large four-fifths width section to turn forward, a one fifth width to go back, and the top area for menus. You can't change that at all. I kept turning the page when I was just trying to get to the menus on the Kindle. Both devices also allow swipes to turn the page, as well as taps in the correct zone.

Also, if you want to change the backlight settings on the Kobo, just slide your finger up and down the screen at the left hand side. You don't have to leave what you're reading, but you can do it via the menus too. On Kindle, that's the only way: tap the top of the screen, tap the icon, and then use the on-screen slider. 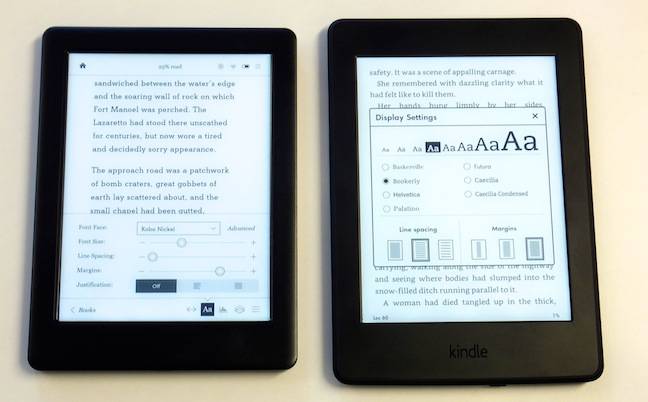 The Kobo also has a wider range of fonts to select from: eleven, compared to the eight of the Kindle. One of those is Open Dyslexic, which may be an important consideration. You can change line spacing and font weight as well as size, and turn justification off too, while the Kindle offers just three settings each for line spacing and margins, with no fine control. Again, for some people these settings won't be important. For others, they can make a massive difference.