The Scientific Secrets of Doctor Who

From inventive storylines to theoretical thinking

The Scientific Secrets of Doctor Who is divided into sections entitled, Space, Time and Humanity, more to categorise the science than the fiction. The pre-1989 classic era is castigated for its crap monsters, generic quarry planets and some historical blips including a fifteenth century castle used in a twelfth century storyline.

It appears, however that the 21st Century series are still regarded as sacrosanct, even the abysmal sub Lloyd Webber soundtrack which soaks all of Space, Time and Humanity in sentimental slush.

The fact that Murray Gold is entirely absent from this publication can only be a positive thing.

A hypothetical question occurs: Should the BBC just offer the job of the next doctor to Brian Cox? And if not, why not give him the soundtrack? After Murray, things can only get better. Should K-9 be presenting Pet Rescue?

Anyway back to the fray, The Three Doctors storyline is presented as an object lesson in the nature of singularities and black holes. There is a strong dose of the ecological dispersed amongst these stories, particularly All The Empty Towers where the Doctor delivers his withering verdict: "It's 2089, it's climate change ... looks like all those bags for life you bought didn't quite do the trick”.

But sooner or later the text reverts to the lowest comic book denominator, like here in Rewriting History: "Plasmatic flame throwers and bone-seeking microdarts”. Other stories such as The Girl Who Stole the Stars seem to be little more than transcribed video games. 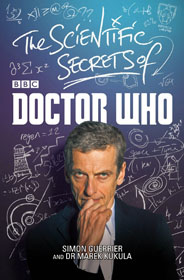 Though sci-fi cliches are generally understated in the fictional sections, the old device of moving present dilemmas into the near future is well utilised in Una McCor's In Search of Lost Time: "Her troubles have turned into a puzzle to be solved with quick thinking and clever widgets”. There is also a thinly disguised Siri clone called ZOE who features in Jacqueline Rayner's Potential Energy.

As well as educating us in the matter of time, space and our not-so-horrible history, we can also detect the BBC DNA running throughout this publication, and towards the end we get a quotation from another doctor, in Jacob Bronowski's The Ascent of Man: "Certainty is the opposite of scientific knowledge. Science as we have seen, is a provisional series of statements based on evidence and testing, with tests that can be repeated. These tests depend on doubt."

Herein lies the main problem with this book; getting a pan-dimensional mega-being to front such a flawed human concept as science is like Iggy Pop selling car insurance, it may grab your attention, but won't improve your driving.

The Scientific Secrets of Doctor Who is nonetheless a good anthology of sci-fi short stories, most suitable for young adults, and it is also a passable introduction to current theories of time and space. However, including both of these books in one volume does tend to bloat it and I feel adding Time Lord yarns over scientific theories seems to confuse as much as enlighten the reader.