Some NEOs would have even more, er, impact. A 1km-wide rock would kill a fifth of the Earth’s population and set civilisation back to the Middle Ages, at least until surviving Register readers were able to rebuild the internet. A collision between Earth and an object 5km wide would cause massive climate change as well as a very big hole, sending us and much of the rest of life on Earth the way of the dinosaurs – this is probably what wiped them out. Summing up the full range of Earth-bound objects, from harmless shooting stars to the end of life, Tate tells us: “We’ve got a pretty big toy-box to play with.”

First, Tate provides the good news: the last 20 years have seen around 95 per cent of NEOs more than a kilometre in size spotted and tracked. Their orbits have been calculated, and none are coming this way for at least a century. And it gets better – if and when we spot one that is, there are plenty of ways to move them out of our way. 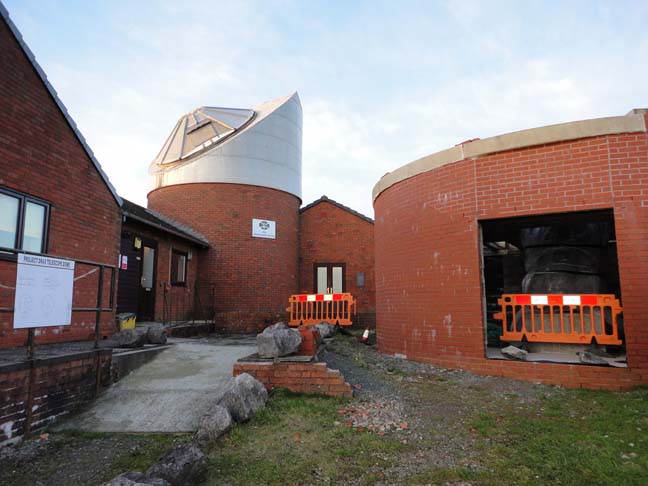 The Spaceguard Centre, with expansion for Project Drax

The nuclear option taken by Bruce Willis in the 1998 film Armageddon is not recommended by Tate: blowing up one large, predictable object would produce thousands of unpredictable smaller ones. Far better to nudge the NEO than nuke it, he tells us, as red kites and buzzards wheel outside. We might use ablation – heating up part of the object, causing it to vent vapour so it propelled itself like a rocket motor – or park a large spacecraft near the object, exerting enough gravity to shift it away from a collision course.

For a comet that rarely comes close to the Sun, we might only have a couple of years to change its orbit – but most NEOs are asteroids, where humanity should have decades to get organised. “The bottom line is, there is nothing here we can’t do,” Tate says, adding that the dinosaurs simply lacked a space programme. The bad news is that we aren’t putting in the ground work – at least, not enough of it. While astronomers have tabs on most of the biggest NEOs, work has barely started on those that could take out a city. An asteroid of 150 metres would reach the ground at as much as 50,000 mph – triple that if it were a comet – continue into the crust then explode, causing a round crater 3km wide.

At the end of 2014, NASA’s Near Earth Object Programme had 11,949 asteroid NEOs on its database, with just 861 of them larger than a kilometre across. Of those between 140m and 1km, Tate says we probably know of just five per cent to 10 per cent of the total. At the current rate of discovery it could take more than century to spot and track the rest. But things are looking up. The US is already involved, through Nasa’s Ames Research Centre and the US Air Force Space Command, with the NEO issue being championed in Washington by US congressman Dana Rohrabacher. The European Space Agency is also increasingly contributing to the field.

So how about Her Majesty’s Government? “Doing nothing. Not a terribly bright idea, current British government policy,” Tate tells us. 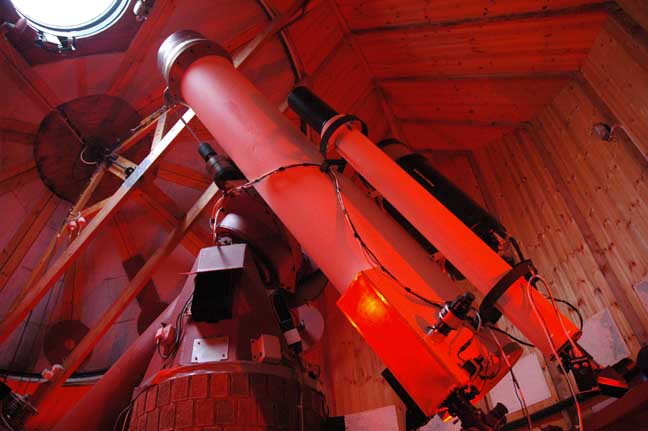 In 2000, the UK government commissioned a comprehensive report on NEOs and decided to give the National Space Centre in Leicester £300,000 to build an exhibition and website, designating it as the National Near Earth Objects Information Centre. The Spaceguard Centre recently took over the national information centre job, but is also part of the global effort to track NEOs. Spaceguard itself is a classic product of British inspiration and inertia. Tate in 1996 proposed that the Ministry of Defence establish a centre to study the threat posed to the UK by the impact of an asteroid of comet.

He claimed support from Arthur C Clarke and scientists including Gene Schoemaker – who helped discover comet Comet Shoemaker–Levy 9 that broke up and collided with Jupiter in 1994 – and Professor Edward Teller, who was an early member of the Manhattan Project which developed the atomic bomb in the US.

The MoD passed on his proposal, but not the Department of Trade and Industry, which funded further study and established a task force to assess the threat. That study led to nothing much happening, so Tate set up the Spaceguard Centre, opened in 2001 by Sir Patrick Moore. It was equipped with private money, although it received a £1,400 award from the Particle Physics and Astronomy Research Council (PPARC) in 2002.

Spaceguard is today home to two large robotically controlled telescopes, used by Tate to confirm other people’s NEOs spottings. Moving us across to his control centre, he demonstrates the process: a progression through three time-separated images of the same patch of the night sky where a NEO is expected, which makes it easy to spot what’s moving. Software automatically prepares reports for the International Astronomical Union’s Minor Planets Center, helping to calculate orbits.

Next page: For those about to observe rock
Page: