Why the BBC is stuffing free Micro:bit computers into schoolkids' satchels 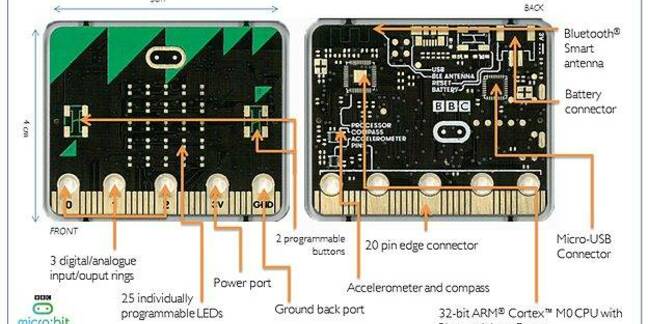 The BBC has revealed the full specifications of its Micro:bit pocket computer board, which is designed to lure kids to embedded electronics.

The global broadcaster has promised “up to 1 million devices will be given to every 11- or 12-year-old child in year 7 or equivalent across the UK, for free.”

The Micro:bit is part of the BBC’s Make it Digital Initiative and will be supported by online lessons, videos, projects and tutorials. The device is expected to arrive in schools in late October. According to the BBC, this is “giving children a chance to settle into new schools, and teachers the opportunity to build this into lesson plans for the rest of the academic year.”

Measuring 5x4cm and weight 8g, the board is built around a 32-bit ARM Cortex-M0 CPU, the smallest ARM core available. Bluetooth is on-board, as is a 3-axis accelerometer and a compass. There is a battery connector for a 2xAAA battery holder, with earlier plans to include a watch battery abandoned for fear that kids might lose or swallow such a small part. A 20-pin edge connector lets you connect the Micro:bit to other computers, including Raspberry Pi and Galileo devices, while 5 chunky I/O rings allow other devices or sensors to be connected with clips or 4mm banana plugs.

The front of the board is the user interface and includes 25 programmable red LEDs for simple displays and two programmable buttons. The rear of the board has a micro-USB port, power connector, reset button and status LED. When connected to a computer over USB, the Micro:bit appears as a storage device so you can install compiled code by copying it across from a PC.

Side view of the Micro:bit board

The Micro:bit also has a tethered mode, with connection to another computer over USB or Bluetooth. Tethered mode enables remote control of the device, which also has internet access through this connection so it can make use of web services.

Next page: Give kids some tools and let them BAKE
Page:
Tips and corrections
86 Comments

Stay frosty: Google to fork out another €600m on bit barns in Finland

That's now €1.4bn splurged on the small town of Hamina

Microsoft debuts Bosque – a new programming language with no loops, inspired by TypeScript