The extraordinary case of the online retailer, special ops watches, and John Belushi

We could be looking at a complete overhaul of search results thanks to a case involving Amazon and a high-end watch manufacturer.

Earlier this week, California's Ninth Circuit reversed a district court decision that the online retail giant does not infringe the trademark of Multi Time Machine (MTM) when it displays competitors' products following a search on its product name.

A search for "mtm special ops" produces a page of watches to buy but none of them are what the consumer is likely to be looking for (MTM's Special Ops range), for the simple reason that MTM does not actively sell through Amazon, and does not allow its retailers to either.

MTM claims that displaying competitors' products following a search of its trademark is an infringement of that trademark and could lead to consumers being confused that the watches shown are actually its products.

Amazon argued in response that the watches shown clearly identified the manufacturer (in this case Luminox), and so there would be no real customer confusion, and hence no infringement.

The district court agreed with Amazon, but the appeals court did not. It felt instead that there was a real risk of confusion. For example, people could think MTM had been sold to Luminox, or that Luminox actually made MTM watches in the same way as Timex makes Versace watches.

The district court decision was reversed, which means that it will now go to trial. The implications could be huge.

Both the court's opinion and dissent include a reference to a Saturday Night Live sketch starring comic legends John Belushi, Dan Aykroyd, and Bill Murray.

In The Olympia Restaurant, the options are limited: a cheeseburger and a Pepsi. Or, as Belushi says repeatedly in response to his guests' requests for Coke: "No Coke. Pepsi."

The argument is that if someone searches for a particular product on a company's website and they do not have it, they should make that clear.

The judgment notes that on Overstock, for example, a search for "mtm special ops" brings up the text: "Sorry, your search: 'mtm special ops' returned no results." It includes no pictures of watches.

There are a number of different ways of looking at this issue, all of which could have far-reaching implications for online searches.

Since the Ninth Circuit of California is the most influential court in the United States on internet matters, and given the continued dominance of American companies online, any decision would also have global implications.

Working for consumers or for yourself?

First up, the approach taken by Amazon could be seen as it using its market dominance to penalize any company that doesn't sell products through its systems.

Amazon has countless black marks on its record for doing just this. It has pressured an enormous range of industries to give it discounts as a way of bringing in business. The more market that Amazon controls, the harder it is for companies to resist signing up to the giant's terms. Those that have stood up to the giant have complained that their products have been delisted or that they have been the target of aggressive PR campaigns.

By seamlessly offering military style watches to a search for a very particular brand (MTM in this case), Amazon is effectively making MTM invisible to huge numbers of people who are actively looking for its product. It's no wonder MTM is furious.

On the other hand, Amazon is offering its customers something useful. And it has gone to some lengths to make its search engine work extremely well for customers. The search results that are displayed come as a result of the company's "behavior based search technology," which tracks what people end up buying after they searched for specific things.

This technology provides a collective wisdom of sorts. You may have heard about one product, but if a huge number of people searching for it end up buying something different, there is a good possibility that the other product may actually be better. Result: a happier customer.

Of course that assumes that Amazon actually sells both products. If it doesn't offer one of them, the process becomes self-reinforcing: people buy whatever other product is close to what they looked for, and that in turn pushes it in front of future customers. The product that everyone is searching for becomes invisible. Good news for Amazon and for the companies that sell through it. Not so good for those that choose to avoid the company.

That said, it is a weak argument to use the example of Overstock not displaying any listings for watches when the disputed search term "mtm special ops" is input.

It is far more likely that Overstock doesn't display competing watches not because of a philosophical approach to its inventory or trademarked terms, but because its searching technology simply isn't as sophisticated as Amazon's.

In effect, the appeals court is arguing in favor of worse technology.

The problem with putting trademark rights ahead of a company's ability to improve its search technology is that it could end up limiting innovation. If every company has to consider trademark rights within its own systems or face being sued, it is going to put a quick stop to experimentation.

Companies might decide it's best just to give customers dead-end responses rather than try to figure out what they are trying to find. In short, online navigation may go backward instead of forward. 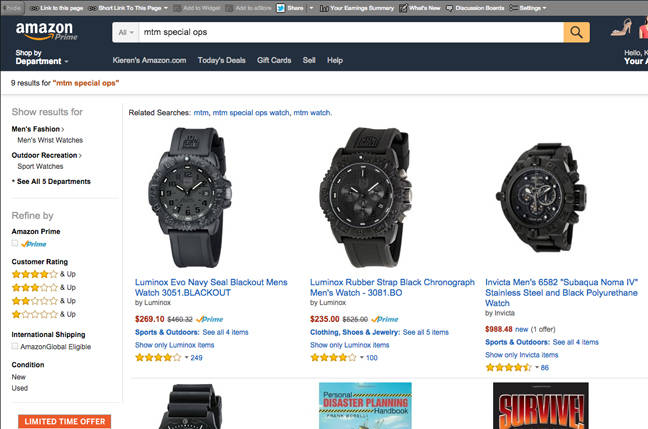 The search result at the heart of the legal case

Next page: The mystery of Eric
Page:
Tips and corrections
62 Comments