Pics NASA has published new photos of the freezeworld Pluto, taken by its Far-travelling New Horizons probe - that prominently feature what appears to be a pareidolic whale and a tasty doughnut (or donut).

The New Horizon space podule is closing in for its 14 July flyby of the frosty dwarf planet.

The images, taken between 27 June and 3 July, were snapped by the Long Range Reconnaissance Imager (LORRI) on New Horizons. LORRI's pics were subsequently combined with lower-resolution color data from the spacecraft's Ralph instrument to form a Google Earth KMZ.

Ralph has a wife, Alice, an ultraviolet imaging spectrometer, although she wasn't involved in the production of this map.

The map these instruments produced offers the mission boffins a valuable tool in analysing "the complex and intriguing pattern" of bright and dark markings on Pluto's surface.

The boffins note that "features from all sides of Pluto can now be seen at a glance and from a consistent perspective, making it much easier to compare their shapes and sizes". 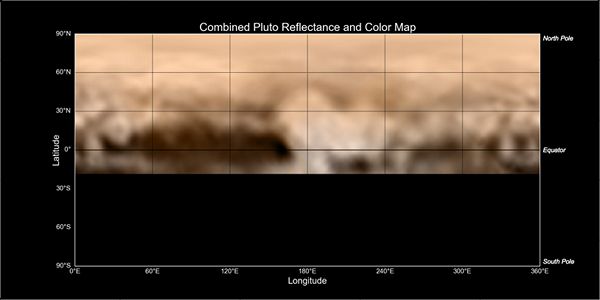 The center of the map corresponds to the side of Pluto that will be seen close-up during the Bastille Day flyby.

Apparently, the "whale" is the elongated dark area along the equator on the left side of the map. It is one of the darkest regions visible to New Horizons and measures some 1,860 miles (3,000 kilometers) in length, or the length of 120,000 of our largest terrestrial cetaceans.

The astroboffins reckon this may be a region where relatively fresh deposits of frost – perhaps made from methane, nitrogen, carbon monoxide, or some mixture thereof – have formed a bright coating.

Continuing to the right, along the equator, there are four mysterious dark spots which intrigued the world, each of which is hundreds of miles across.

Meanwhile, the whale's "tail", which NASA notes is at the left end of the dark feature, that is, on the side other from the head, cradles a bright doughnut-shaped feature about 200 miles (350 kilometers [14,000 whales]) across.

At first glance it resembles circular features seen elsewhere in the solar system, from impact craters to volcanoes, but the boffins are restraining themselves from offering any interpretations of this and other features on Pluto until more detailed images are at hand.

The higher-resolution images, which will be provided in the days to come, will allow mission scientists to make more accurate maps, but this release should provide exciting foreplay for extraplanetary voyeurs.

"We're at the 'man in the moon' stage of viewing Pluto," offered John Spencer of the Southwest Research Institute, Boulder, Colorado, who is deputy leader of the Geology, Geophysics and Imaging team. "It’s easy to imagine you're seeing familiar shapes in this bizarre collection of light and dark features. However, it's too early to know what these features really are."