All-flash is a synonym for a tough market

Comment Last week NetApp launched a new line of all-flash arrays (AFAs) called AFF. It’s based on a specialised version of ONTAP, which has added particular optimizations to read/write data paths. It’s not the notorious FlashRay yet, but it’s not that bad and it has something to say... especially if you are already a NetApp customer.

New entrants do it better

There is no doubt we are not talking about the top notch implementation for a flash array. Startups like Pure, Solidfire, Kaminario and others designed their product from the ground up just a few years ago. They started from scratch without constraints and without a legacy to maintain.

They have a modern design, in some cases more scalable, efficient in the way they manage flash, and easier to use. Sometimes they have some particular features that make the difference. If you start building a brand new infrastructure, the advantages can be really relevant and even the worry of working with a startup might vanish!

Unfortunately, in most cases, this isn’t what always happens. Enterprise IT infrastructures are usually already in place, and moving to flash storage is a necessity for just a small part of existing applications that need to be supported by much more predictable, fast and agile storage systems. I’m not talking about pure speed in this case; fast and agile can mean many things, like faster provisioning, faster resource reallocation, faster migrations and so on.

Flash is just a feature

Flash is an enabler for a more agile storage infrastructure, but it’s not the only one. And in many cases infrastructure and organization complexity transform flash into a mere feature. 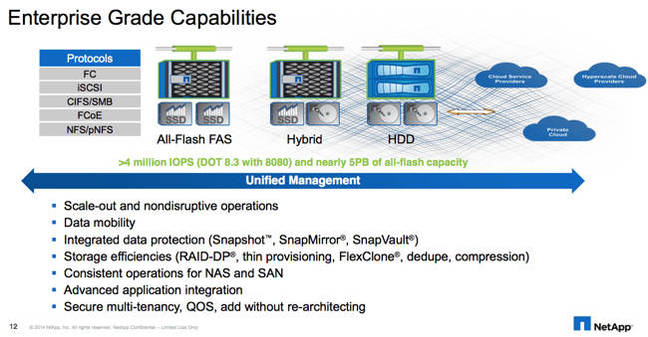 At the moment, on a capacity basis, only 4 per cent of storage sold is flash. The rest is disk. Four per cent is much less than what is usually deemed to be active data in a traditional enterprise (it runs from 10 to 20 per cent).

It will take some time before flash becomes as important as disk in the data center, and in the meantime a lot of things will happen.

Today the world is hybrid (Flash + HDDs) and tomorrow it will probably be hybrid too (with faster + slower types of memory). Not the single system perhaps, but infrastructures will remain hybrid.

Most storage infrastructure involve various storage tiers (including the cloud), and users want to move data between them seamlessly. The best way to do it is to have the same storage OS and a rich set of features. In fact, some vendors offer different solutions in terms of storage media but with a common set of functionalities and features throughout the entire product line (and NetApp is one of them).

If the project is complex or the flash array has to be integrated into a complex infrastructure, it is easier to adopt a single vendor that can provide a decent solution; the solution you need.

My argument could be countered for smaller infrastructures where complexity is not a major issue, but again, for the user, it could be easier to continue buying from the same vendor if they are satisfied with what is being offered.

Two years ago the all-flash startups were particularly well positioned due to the way they managed flash memory, but now this technology is just common ground for everyone. For example, NetApp now offers a seven-year warranty on flash – a sign of confidence, don’t you think?

These startups maintain the technological leadership, but traditional vendors are catching up very quickly through acquisitions (like EMC and XtremIO) or experience (like NetApp: it says it is pouring its FlashRay experience into ONTAP and AFF).

The gap is closing rapidly, and these startups need to react as fast as they can. They've got to have products capable of serving blocks as well as file or objects, and build integrations (or integrated data services) on top of that.

The market landscape has changed considerably, and it’s really tough now to find a major differentiator. The most interesting vendors are working on analytics to make a difference. Also, primary vendors are looking more at managing data instead of simply storing it.

I can’t really see any of these startups growing as expected by investors and the market, unless they have a broader product line-up to compete toe-to-toe with traditional suppliers. ®